The Girl, and Her Pig

We simply can’t describe Amity Blamity any better than the publishers do: “Meet Gretchen & Chester. Gretchen is a shy 4 year old and Chester is a potbellied pig. They live with Gretchen’s Grandma and listless Uncle Downey in rural America.  Mistaking their afternoon activity of playing office for entrepreneurial gusto, Downey recruits the duo to assist in his deluded aspirations of running moonshine (echoing his boyhood heroes Bo & Luke Duke). Unbeknownst to the outlandish family and their activities, strange forest critters begin to lurk in the woods nearby, disrupting their quirky daily life and sending them on an adventure to save their degenerate Uncle from a strange genetic mutation!” Got that? Now Slave Labor Graphics have published Mike White’s black & white on-line comic strip story (so far) as a single soft-cover trade paperback. Check it out (including a YouTube trailer) at SLG’s web site, and see the comic itself (including more full-color “Sundays”) at the official Blogspot. 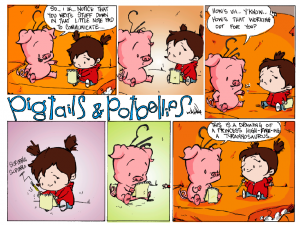