It has now been 9 months since a very well-known furry artist, James Hardiman, passed away. (Far too soon.) If you had a chance to meet Jim at a furry or comic book convention over the years, you might well have met Pauline Hardiman — she’s his mom, and was something of his business partner for his art sales. Recently, Pauline let it be known that she and Jim’s family are hard at work trying to complete and publish Jim’s last work: A Skunkworks graphic novel, starring the famous sexy skunk sisters Natasha, Lori, and Onyx (and their equally sexy mother, Valencia). Pauline has been working together with Jason Canty of Angry Viking Press to get the graphic novel in publishable shape. Currently Angry Viking Press is running a Kickstarter campaign to finance their latest batch of publications — and the Skunkworks graphic novel is among them. Check it out. There’s some further explanation from Pauline. 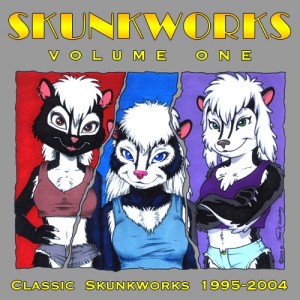 Sad to hear that the greatest skunk artist has gone, I have been looking for his works in hardcopy
very hard to find, I hope someone continues the skunk girls adventures with honour a respect to this wonderful man. sadly I never got to meet him. blessings in light to everyone

A bit of trivia here. There were two bubbles in Flayrah's history that stories got held up from publishing. One of them from that first bubble is an Obit by Greenreaper about his passing. Clearly the story is no longer timely as when it was first submitted. It's good to see this story acknowledged the passing.