The future can be scary — and welcome to it! Writer Brian Ashcraft notes in an article at Kotaku.com that he’s not very thrilled with the re-design of the characters for the upcoming CGI feature version of Ganba no Bouken (also known as The Adventures of Ganba). If you didn’t know, Ganba no Bouken was originally an anime TV series in the 1970’s about a rat and his rodent companions who sail off on adventures while trying to avoid a terrifying white weasel. In the 1980’s the series was made into a popular 2D anime feature as well. The article includes a trailer for the CGI version.  See what you think. 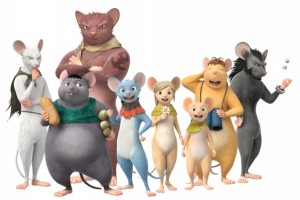 No! The 1975 animated TV series was about their quest to FIND the isle of the White Weasel ("the worst weasel in the world!"). I loved all 26 episodes; they were a key element in making me a devoted anime fan.

And, apparently unlike most other fans, I liked the plot and the spunky personalities much more than the super-stylized art look. So I'm looking forward to this new "bland" movie version.

One of the first things every anime fan learns is that the Japanese don't distinguish between "m" and "n". He'll always be "Gamba" to me. (And which character is the drunken doctor? The far left?)