White Bear in a Golden Cage

According to Cartoon Brew, Lionsgate Features is set to release their next animated feature, Norm of the North, on January 15th, 2016 — which would put it in direct competition with the planned release of The Nut Job 2. Lionsgate, of course, is best known in animation circles for the Alpha & Omega films as well as (shiver!) the infamous Food Fight! movie. This time around they present the story of Norm, a polar bear who travels to New York City to try and save his arctic home from development… but winds up distracted by the glamour and glitz all around him. (Sort of “The Bear Who Fell To Earth”.) Directed by Trevor Wall, Norm of the North stars the voice of Rob Schneider (Deuce Bigalow: Male Gigolo). The article at Cartoon Brew includes the first trailer. 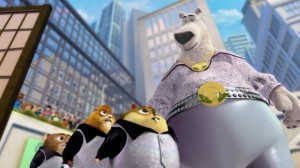 Lionsgate is a distributor. "Alpha & Omega" and its direct-to-DVD sequels have been produced by Richard Rich's Crest Animation. Lionsgate has been releasing (or distributing) lots of other movies, none of which it's produced.

Well, Lionsgate is a producer in the sense that it put up the money for "Norm of the North". The animation is by Splash Entertainment in Woodland Hills, California, and Telegael in Spidéal, Conemara, Eire.