A New Dawn for the SWAT Kats?

If you haven’t caught the word, creators Yvon and Christian Tremblay have been running a Kickstarter campaign with the intent of creating the first new SWAT Kats animated TV episodes to be seen in 20 years. Also if you didn’t know: SWAT Kats — The Radical Squadron was one of the most iconic and popular anthropomorphic animated TV series from the early days of organized Furry Fandom. “The series takes place in the fictional metropolis of Megakat City, which is populated entirely by anthropomorphic felines, known as ‘kats’. The titular SWAT Kats are two vigilante pilots who possess a state-of-the-art fighter jet with an array of weaponry. Throughout the series, they face various villains as well as Megakat City’s militarized police force, the Enforcers.” The good news is that with only a few days left for the campaign, the brothers Tremblay have more than surpassed their original goal. They’ve reached enough to animate a 2-minute animation teaser for the new series (SWAT Kats — Revolution), and they’re hoping to make enough to animate a full 22-minute episode. The campaign web site has a video interview with the brothers. 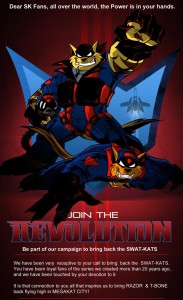 Cool :) Interview with the creator coming soon on http://dogpatch.press. 4 days left on the Kickstarter right now!