Chickens from Across the Border

From out of nowhere… Well, actually, from Mexico. Un Gallo con Mucho Huevos (A Rooster with Many Eggs) is the first animated feature film produced in Mexico to receive wide distribution in the U.S. This Labor Day weekend in was released in nearly 400 theaters in Spanish with English subtitles, though a version dubbed in English is due to arrive in a couple of weeks. Cartoon Brew has some extensive coverage of it. The story is pretty familiar: A young rooster lives on a farm (with anthropomorphic chickens and anthropomorphic eggs; go figure) which is hurting financially, and he must figure out a way to save it. Admittedly his solution, which smacks of real-life cock-fighting, might make some folks a bit uncomfortable — we’ll see. Distributor Huevocartoon (they have this thing for eggs…) have firmly set their sites on the U.S. animation market. 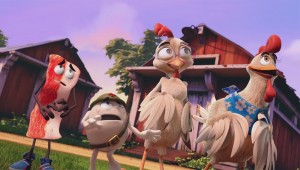 There are billboards advertising "Un Gallo con Muchos Huevos" in my neighborhood. It's getting serious promotion.

And apparently it's working: According to a follow-up article on Cartoon Brew the film is doing very well this weekend.

This is especially encouraging since, as Cartoon Brew points out, "Un Gallo con Muchos Huevos" is still only playing in Spanish with English subtitles -- the English-dubbed prints haven't been released yet. I'd like to say that this shows that Americans are finally willing to watch subtitled foreign movies, but it's more probable that this first release of the movie was carefully planned to be in Hispanic neighborhoods where the Spanish dialogue wouldn't be a problem. My area of Sylmar, California (a suburb of Los Angeles) is heavily Hispanic, which makes the billboards for "Un Gallo con Muchos Huevos" logical.