Kymera Press (home of Pet Noir, which we reviewed recently) has another interesting title in Gates of Midnight. Meet Raven Moon, a decorated combat veteran who’s come home looking for rest and healing after her tour of Afghanistan. Instead she finds deadly secret and a hidden world of monsters. It seems that her father is not only a New York police officer, he’s also a magical warrior charged with keeping his city safe from monsters as they “gate” through to our world. When he is killed on a monster hunt gone wrong, guess who is next in line to be the warrior? But Raven soon learns there is far, far more to these monsters than she is being told… Written by D. Lynn Smith and illustrated Amelia Woo, Gates of Midnight is up to issue 6. Check it out over at Kymera. 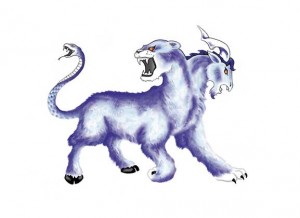 Thanks for the review, both of Pet Noir and of Gates. I'm happy you're enjoying both.