The Girl and Her Magical Forest Friends

Recently (October) it was once again time for MIPCOM in France, where dozens of TV production companies seek out international distribution for their new shows.  Including lots of animated TV series — including several of furry interest. Among them is Deer Little Forest, which is actually part of a large international marketing campaign aimed at very young kids.  (Check out their web site to see what we mean.) Among the many places you’ll find Deer Little Forest is an animated TV series created by King Rollo Films. “Deer Little Forest is a preschool brand created by Henries’ Award-nominated illustrator Jo Rose, currently being developed for licensing, publishing and television. The world of Deer Little Forest stars the irrepressibly enthusiastic Flo and her band of charming, silly, helpful and wise woodland buddies: Bodhi Bear (never shy to lend a helping paw), Rowan the Philosophical Fox (yogi and Japanese gardener), Barley-Crumb Badger (usually unearthing an interesting factoid under a rock), Lockhart Deer (relentlessly toot-tooting his horn and crashing about in glee), and local boy best friend Toby (the city slicker charmer).” You can see a preview of the TV series over on Vimeo. Turns out there’s also a Deer Little Forest app available. 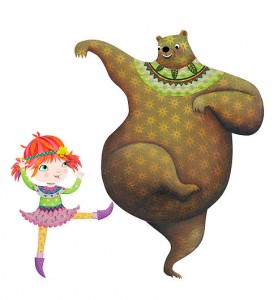 Thank you for covering our lovey DEER LITTLE FOREST. I am th epart owner and publicist but I don't knwo your newsletter....could you tell me a bit more about you?

And by the way, our DEER LITTLE FOREST app just launched as well....

Hi Lisa. This is Flayrah, a news source for furry fandom - and this particular post is syndicated from In-Fur-Nation, a furry blog. You can contact its editor with the email mentioned here.