This is direct from Animation Magazine’s web site: “Brown Bag Films and Cyber Group Studios have launched production on Gilbert & Allie, a new animated series that has been acquired by Disney Channel EMEA. Created and directed by Bronagh O’Hanlon, Gilbert & Allie is an odd-couple supernatural comedy about the sparks and spells that fly when a teenage girl discovers she has wizardly powers. Unfortunately, those powers can only be harnessed in partnership with an ancient and extremely grumpy magical rabbit that just wants to retire. Produced in France and Ireland, Allie’s adventures as a wizard-in-training facing the everyday challenges of a teenage girl will be animated in CG, while her visits with Gilbert to the magical realm will be created in 2D. Aimed at ages 8-11, the series will launch on Disney Channel in Europe in 2017.” Aw, those European kids, they get everything! We’ll let you know if we hear any word of Gilbert & Allie being released in North America between now and then. 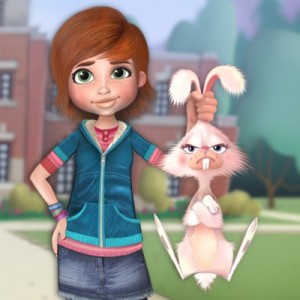 Are we all outraged by this picture implying that it's okay to hold a bunny by its ears? Probably even magical bunnies wouldn't like that.