The Times They Are A’Changing

More back in the “where have we been?” realm is the Wereworld series of books written by Curtis Jobling — who happens to be the creator of the world famous Bob the Builder and (for Nickelodeon) Curious Cow. But he’s always harbored a soft (dark?) spot for classic horror, and now the Wereworld series is his first set of novels… still for young readers but decidedly for older kids! “Imagine a world ruled by Werelords–men and women who can shift at will into bears, lions, and serpents. When Drew suddenly discovers he’s not only a werewolf but the long-lost heir to the murdered Wolf King’s throne, he must use his wits and newfound powers to survive in a land suddenly full of enemies. Drew’s the only one who can unite the kingdom in a massive uprising against its tyrant ruler, Leopold the Lion. But the king is hot on Drew’s tail and won’t rest until he’s got the rebel wolf’s head.” And that’s just the first book, Wereworld: Rise of the Wolf from 2012. The series is up to book six now, and more are coming.  You can find the books in paperback over at Amazon, or check out the Wereworld web site for lots of background and extra goodies — or baddies. 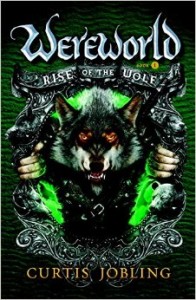 These were reviewed on Flayrah when they were first published.

Where have I been???

It's not like you weren't busy running your own site.