… And They Can Talk To Him

One from last year. The Zoo at the Edge of the World (by Eric Kahn Gale) is a fantasy novel about a young boy named Marlin. “Marlin is not slow, or mute; what he is is a stutterer, and that makes it impossible for him to convince people otherwise. What he is also is a Rackham: the younger son of the world-famous explorer Ronan Rackham, the owner and proprietor of the Zoo at the Edge of the World, a resort where the well-to-do from all over the globe can come to experience the last bit of the wild left at the end of the nineteenth century. In order to impress a powerful duke who comes to visit the zoo, Marlin’s father ventures into the jungle and brings back a mysterious black jaguar, the only one in captivity. Everyone is terrified of it, including Marlin—until one night, when the jaguar confers upon him a powerful gift. Soon, Marlin finds himself with a difficult choice to make and, finally, something to say. If only he can figure out how to say it.” That gift, if you need it stated more clearly, is the ability to speak to non-human animals. Which makes for a complicated narrative of characters young and old, human and not human. The Zoo at the Edge of the World is available in hardcover and paperback (from Harper Collins) at Barnes & Noble. 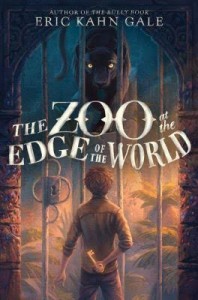 This is very reminiscent of a real-life story, if you've listened to the "Wild Eyes" episode of Radiolab: http://www.radiolab.org/story/91560-wild-eyes/