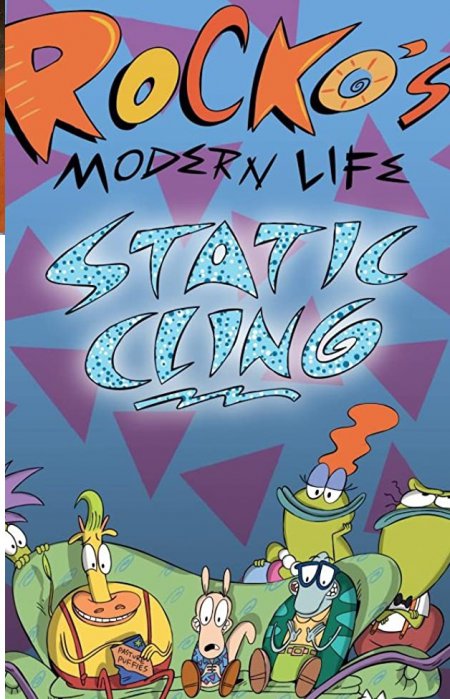 The two decades passed are covered pretty rapidly at the start of the show with Rocko’s re-entry causing Conglom-O to go belly up, which of course symbolizes the recession. You may think that’s a smart observation on my part but when confronted with the tanking of Conglamo Mr. Bighead uses the words “I’m too big to fail” which makes it quite obvious what it alluded to. As I said, most elements are heavy handed here. There is literally a cloud character called “The Whinds of Change” for crying out loud.

The show follows Rocko on his mission to bring back his favorite cartoon, the Fatheads. There are obvious parallels between the wish to revive the in-world cartoon show as a reflection of the hopes of Modern Life fans for their show to come back as well. In order to bring it back, Rocko has to go find the Fathead’s show creator Ralph Bighead.

The theme of the show fits well with its title. It has to deal with how the things we look upon favorably in the past cling to us. Which means that as our environment and world changes around us, we can have frustrations and sometimes direct them in unhealthy ways. As we try to pull away from that past, we can get a bit of a shock as it tries to retain its hold.

Now, most have probably already heard of the changes that Ralph Bighead had gone through transitioning to Rachel Bighead. Most in the fandom discussed that aspect following the short’s release. While that is a major change in one of the characters and it causes Mr. Bighead to disown his offspring for a time, his reaction is also on the back of other changes going on in Edward Bighead’s life that is causing him additional stress. His job and his home he had shared with his wife were being knocked out from under him. So on top of all of this, learning that his son has transitioned to a daughter caught him off guard and was something he was not prepared to take.

The interesting thing that more people didn’t point out, is how Rocko also goes against the transitions that Racheal went through. Not for her gender change, which he and his friends immediately accept, but for the change that they desired in her life and art. Despite her wish to not continue the show, Rocko and his friends pushed her to continue. Though, in that case, she was glad to help when she heard her parent’s house was at stake.

However, even when the new episode of the Fatheads does come out, it has changed in such a way that the wallaby decries that the art had changed too much. Even though he had gotten the original artist to be involved in the show, the show was different, and different is bad. There was a Baby Fathead! Which given the crazes of “Baby Yoda” later on in the year, followed by “Baby Peanut”, it is ironic that “Baby Fathead” beat the ‘baby’ craze by three months.

It was there first y’all! In the midst of trying to poke fun at the modern world it even poked fun at the part of the year that hadn’t happened yet!

Rocko’s decry of the art change is like the phantoms from Final Fantasy 7 Remake, though a bit more blunt in this case. The message that Rocko’s reaction is that fans who are too tied to the way things used to be can hinder the progress of the creation of something new and wonderful. Likewise parents that are too tied to the methods, means, roles, and identities they grew up with can hinder themselves into enjoying the time they have left with their families when their sons and daughters utilize and adapt themselves to who they want to be using the tools and means at our disposal.

And while we can agree that some changes universally stink, like the one we find ourselves in now, we need to change ourselves to temper though them and see it through for one another.