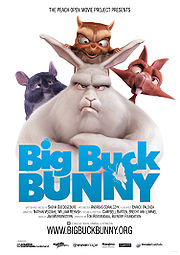 The film is released under the Creative Commons Attribution 3.0 license. This release also includes all of the project files, which means that everyone can make new productions based on the original project files.