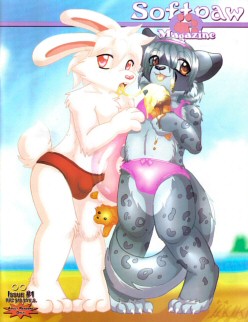 Softpaw #1 - Cute, but not innocent

There's a new furry fanzine making the rounds. You probably won't see it on the shelves of your local comic book store, though, or in any public library, since its prime attraction is pornographic cub art and stories.

Softpaw Magazine #1 was published in November of last year,[1] joining the catalog of furry dealer Rabbit Valley this February.[2]

The magazine's retail price is $20—distinctly higher than smaller, black and white furry comics which usually sell for less than $5. Conversely, Softpaw's format is 8.5" x 11" with between 64-80 pages in full colour.

The pair seeks to raise US$12,000 through pre-orders and donations to cover costs associated with the next issue, ideally before Anthrocon 2007 where they will be participating as dealers.[4] As of May 27 they had $9,291, helped in part by a $5 discount on pre-orders and a pizza party at Further Confusion 2007 and Califur 3.

While laws in various countries differ, US law specifically permits works which are "distinguishable" from images of an actual minor.[5] However, many in the fandom feel that such depictions are morally wrong, or at best, place the fandom in bad light. Some groups, such as the now defunct Burned Furs or (active ) Improved Anthropomorphics group, have tried to decrease the impact of such interests in the fandom through a variety of methods, often controversial in themselves.[citation needed]