Saturday the 21st of June marked a significant day for Northern furries, the first UK convention outside of London, ConFuzzled. Of course, I had to wake up late. After a power-shower and a quick breakfast, I arrived in Manchester, meeting with Tori and Silentwulf, among others including Hyss and Istauri. I must say, I've never met quite a more friendly bunch of people, and this being my first meeting with a group from the fandom, ensured that my positive view on furries continued.

« It's been fantastic and hell to all the neysayers! » ~ Lazerus

After fooling around in central Manchester, we decided to hit the con earlier, so following the expert navigational skills of Tori and Istauri (we got lost) we finally arrived. We sat in the lobby talking among each other, embarrassing Eric, hearing Ember tell us of Tori's tickly legs, listening to him announce Tori's first article draft to the world and getting disturbed by Spore creatures. Then all of a sudden, I saw my first fursuiter. Exiled Wolf, Head of Media Relations for ConFuzzled was the first to awaken, quickly followed by more and more. "He looks like a Zombine" was my first comment. At first, I was a bit weirded out by the fursuiting, but once I became more comfortable with the idea, I thought it was excellent.

An overview of the author's day in Manchester. Video by Silentwulf.

After a quick tour round the convention centre, and after I'd stopped wishing I could go in the video game room and win the Guitar Hero competition, it was time for the Furrylimpics.

"What exactly is this?" I was asking, but nobody around me was able to give me a good answer, so it remained a mystery until it started. Turns out, it was one of the most entertaining thing's I've seen for a long while. After two rounds, the Red team, also known as "Dead Sheep Don't Say No", had excelled and were 2-0 up thanks to quick jigsaw-solving skills and having the best bone-balancing abilities, they looked a certain winner.

The next game was Furry Musical Chairs, and I must say, it was as entertaining as anything. Seeing 20-odd fursuiters scrambling for chairs to the Benny Hill Theme was hilarious. Most took defeat in their stride, apart from Ember Komodog who didn't match the £8 that he'd bet on his own win, until there were two suiters left, both from the Blue team, "Cheap and Playful Toys". After pulling it back to 2-1, the Blue's would need to win the next game to force a tie-breaker, and remarkably, they pulled off the comeback. This meant the tie-breaker had to take place, which was a hula relay. It was close, but in the end, the Blue team, at a disadvantage for having Blacksnip who was wearing a horse fursuit with no grasping abilities, beat the Red team in a very close contest. Coming back from 2-0 to end up winning 3-2 was quite an achievement. 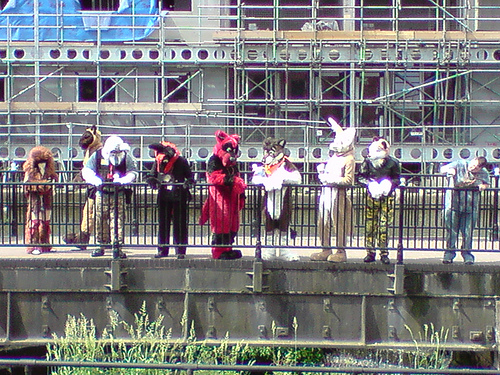 After the event had finished, we returned to the lobby to converse some more, but then it was time to leave. Disappointed that I couldn't stay and see more, Exiled Wolf took us of site, briefly delayed by trying to find Istauri who was still hiding inside.

The whole reason I wanted to report on the convention is that it was a new experience that I ended up thoroughly enjoying. As daunted as I was at first by the presence of the fursuiters, I grew to love the fandom in the few short hours we were there. I was sad to go, not helped by the fact that everyone I talked to were some of the friendliest, un-judgemental individual's I have ever met, so thank you to all those people who didn't cast me aside for being an 'outsider' to the fandom.

Am I an outsider now? No, this convention truly opened my eyes to the furry culture and - I must say - I love it. The people are great, you're guaranteed a great time with them, and most of all, it's a brilliant way to enjoy yourself. What I saw of the convention was brilliant, the organisation seemed top-notch, so kudos to the chairman and everyone else who helped out. I may have been the only mundane individual there, but I certainly didn't feel that way. So thank you to those I met, and to those I wasn't able to, and here's to the furry fandom, and Confuzzled 2009!