The Zeitgeist was markedly different mid 2019 when the local furry community started looking forward to their next annual get-together. Compared to Camp Feral in some quarters, the recipe was just about perfected back in 2017. An intimate, all-inclusive convention where the emphasis is on community and group activities. South-Afrifur is the brainchild of the visionary that was Ivic Wulfe that saw the first proper furry convention held on the African continent. Three years strong and going from strength to strength. But, of course, 2020 happened. And the fandom wasn't spared.

The organizers did the sensible thing and postponed the in-person meet not once, but twice, so that the pandemic could run its course. So profound was the isolating effects of the lock-down that an online only local convention Fursaverance saw its debut. There were cries of jubilation when it was announced that South-Afrifur would return in 2022. Covid would not be the end of the troubles, though. In May 2022 - just as the convention organizers went all-hands-on-deck - news came that Ivic Wulfe passed away.

The con must go on

Forward to the 8th of July 2022. My thoughts as we departed for the venue were that - if nothing else - the gathering would have to be held in Ivic's honour to be considered a success.

Because of a scheduling conflict on the part of the venue, the convention had to be moved from Ekudeni to Valverde some 30km away. The venues are very similar. Both are located outside of the closest major cities. Both offer similar facilities; they are village-style resorts often seen in the greater Gauteng Province. They provide accommodation, some restaurants, a chapel (mainly used for weddings), and conference facilities. The main difference being that Ekudeni offered more in terms of wildlife and overall felt further away from civilization. On the plus, however, from Valverde it was only a couple minutes' drive to grab some snacks and cigarettes from the nearest convenience store.

By Friday evening the resort had filled with fluffy ears and swaying tails from near and far. The number of attendees this time round were fifty-seven souls. There was a total of eighteen fursuiters. After the welcome speech by Yukon, new South-Afrifur's chairman, we all settled in for dinner and had the evening to socialize and catch-up. There were many new faces, including those of furries who had their awakening during Covid and had never actually had the opportunity to meet outside of Telegram and VRChat. 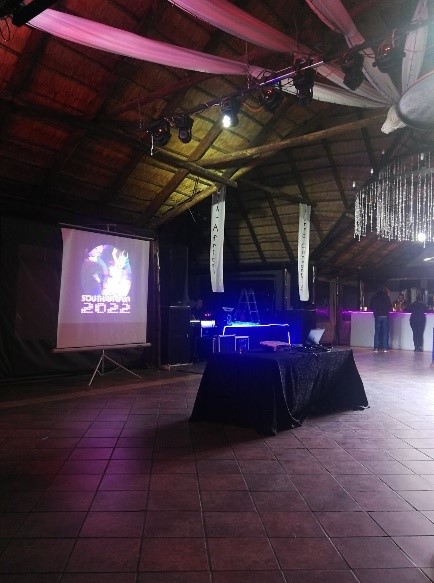 Charitable and jovial in spite of it all

The serious work got underway on Saturday, which was primarily filled with activities in and around the Artist Alley. Everything from fursuiting props to t-shirts to home-baked ginger cookies were on sale. Creators and admirers mingled. Deals for future fursuit commissions were clinched.

My impression is that sales overall were not as strong as in previous conventions. This was expected; in no small part due to the struggling economy. One item that did out-sell expectations, however, were raffle tickets. ALL the raffle tickets were sold! Along with proceeds from charitable sales and other donations, an estimated ZAR17000 (approximately US$1000) was raised for the three charities supported by the convention. The charities being Jugomaro Predator Park, Cheetah Experience and PACT. 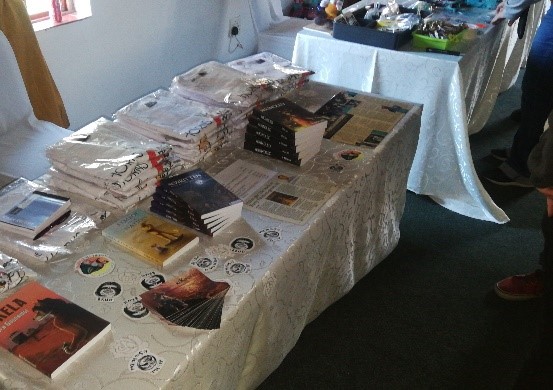 For the first time since its inception, South-Afrifur held a fursuit dance competition. There were three acts, all dances. Metalus the Dragon was crowned the overall winner. In the Rose Hall, a movie about a dashing band of criminals lead by a Wolf was shown for those who did not want to join the rave afterwards. The DJ, as the year before, was Furnixwolf. He not only provided the music, but also all the sound equipment, lights, lasers and smoke machines.

On Sunday we held our scavenger hunt. And panels. There were only two panels this year - one on streaming and one on fursuit making. These were followed by photo sessions and fursuit games. The Snep called Shiro was crowned the overall winner. The last point of order was the prize-giving and the raffle draw.

The time had come to say good bye. There were long deep hugs and solemn words of good bye. There were assurances that we would see each other again, but the memory of the last time those words were said hung pervasive like the morning cold. The parking lot emptied out. Organizers and volunteers started taking down posters and packing all the equipment. Participants took to social media, sharing pictures and good memories. Friends lists bulged with new connections made as the realization dawned - it was all over. The mundane world awaited us.

But what about Ivic? Watching solemnly from the corner of the hall the entire time, a framed portrait of his fursona, his human form and a small obituary. A green candle flickered away as the events of the weekend unfolded. He dwelt there in spirit and I am sure if he could speak to us from the afterlife, he would say "Well done guys, you make me proud." 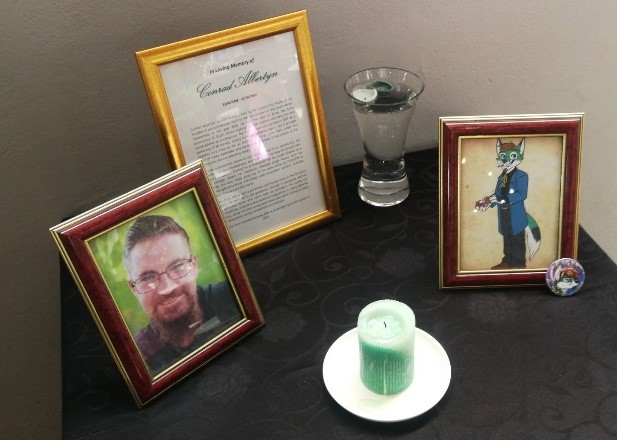 Is it a tightness in my chest? Or is it perhaps the afterglow of one of his spine-snapping hugs I last felt from three years ago? South-Afrifur convention 2022, if nothing else, was a reminder to cherish our friends whilst they are still with us. Never pass on an opportunity to say something nice. To give a hug. To share something from the heart. The world we live in is harsh and uncertain. Hold no regrets. As with Long Covid, we will always be haunted by the unfortunate things that have come across our path. Fading, but never vanishing completely. Let good memories balm our wounds; the good ones can last a lifetime, too.

And because of covid, the chances I had to attend, happened to coincide with it not happening... I'm glad it went well this year and it seems to be growing strong. Hopefully I will have an opportunity to join in at some point.

It still hurts thinking of Ivic. He was also remembered at Lakeside Furs because I was there with Tanit, who was wearing his old South Afrifur con shirt.

I guess that since I live in the very same town as a furry convention that I never really considered that some parts of the world never got to experience the joy of a furry convention. Ivic did South Africa a great deed, and I'm sure that he would be proud of this year's South Afrifur Con.