As governments restrict gatherings of people, furry conventions are being postponed or canceled. Here's a quick run down of events and their status as of December 27th 2021 20:30 EDT (UTC-4) in response to the COVID-19 pandemic - updates to come.

A new section has been added for past events impacted for historical purposes. More information will be added to deal with virtual versions of a physical gathering if applicable.

Links go to statements if available, or to their Twitter feed or site. See also: Furry Fandom and the Internet forced back to roots by viral outbreak

Update 2021 Year End - As conventions start to open again, the overall list of cancellations and delays is becoming clunky. The final update will be today December 27th, 2021. Any future cancelations or delays will be their own newsbytes or articles in the future.

Leading UK furry convention ConFuzzled has postponed registration for 2020 due to Brexit.

According to convention chairman Rizzorat, "configuration changes to our payment systems" which include switching payment providers necessitated a delay to "reliably implement and test" them. ConFuzzled registration, previously expected to open tomorrow (Friday, October 11), is now to open November 1 at 20:00 GMT/UTC+0 – British Summer Time to have ended October 27.

Organizers apologized to those who may have "made special plans to be available tomorrow evening to ensure you secure your registration", going further to justify and explain the change, which was felt to be "absolutely necessary to ensure your peace of mind" ahead of the event's 13th instance:

Why are we making this decision? As a result of uncertainty surrounding the UKs departure from the European Union, our banking & credit card handling partners have imposed additional conditions that we’re having to work through. Unfortunately, this is resulting in various operational changes, including (but not limited to), switching our payment partners to ensure we can maintain our normal operations.

We’d like to reassure you all that registration will be going ahead on the new date, and that ConFuzzled is not financially impacted by the above changes. Furthermore, we are fully confident that we can continue to welcome those of you who visit ConFuzzled from EU countries. Whilst we expect travel documentation requirements may change, as long as these are satisfied, we see no reason you should be unable to visit ConFuzzled.

Kyell Gold to be ConFuzzled 2013's second Guest of Honour

UK furry convention ConFuzzled has named Kyell Gold as its second Guest of Honour for 2013. Gold is a prolific and popular furry author whose work includes the Out Of Position series and contributions to Heat. (See Flayrah's coverage.)

Gabapple, furry artist and creator of the webcomic Dangerous Cute, was the first 2013 GoH to be announced.

Popular European conventions Eurofurence and ConFuzzled have announced their intent to form a combined body: EuroFuzzled.

The merger made a lot of sense, as slippery convention spokesotter Tungro explained:

Running a convention involves a lot of logistics and expertise, as well as time and commitment. In order to reduce costs and overlap, it is in the interests of both conventions to pool resources together.

The UK and DE editions of EuroFuzzled will still be lead by Matt Lion and Cheetah respectively; however, art show panels, registration systems, badge printers, regualar guests, hired entertainers and gophers will be shared between the conventions.

The news goes some way towards explaining the recent notice of ConFuzzled's cancellation.

Update: A new announcement from ConFuzzled suggests the merger will not go ahead.

UK furry convention ConFuzzled 2010 went out in style this weekend, raising £6,200 for the Wildlife Heritage Foundation.

The final auction item was a piece of tablecloth art by guest of honour TaniDaReal. Starting at £50, the price rose swiftly, fueled by a bidding war between ConFuzzled staff member Colifox and U.S. fur Beshon, ending only with the latter's bid of £2,000 (US$2,962). The latest news suggests clear skies for the UK from 7AM onwards, including Manchester. However, foreign visitors also have to worry about their trip back on Sunday or Monday.

The situation for UK airspace, particularly over the North and Scotland, remains unprecedented. [...] Scientists are tracking the cloud's movements constantly but its location changes frequently, depending on the strength of eruptions and prevailing winds. When the ash level exceeds that agreed as safe by the industry we have to restrict flights accordingly.

ConFuzzled '09 has sold out

The convention has sold out 5 months earlier than in 2008, due to such positive feedback from an initially sceptical public

ConFuzzled 2009, the second rendition of the Manchester-based British furry convention, has now sold out!

ConFuzzled - the first fully-residential furry convention in the UK - was initially deemed "the convention that wouldn't happen", due to scepticism over the viability and interest in a convention; this was condemned along with previous failures at starting a British event.

However ConFuzzled turned out to be a runaway success, and that seems to have come this year too, with all places selling out five months earlier than in 2008, despite the addition of numerous "attending only" tickets (the lack of which was a large criticism of ConFuzzled 2008).

A waiting list is now in action, so if you're still iffy on attending then now's the time to make your decision.

Whether we here at FT cover ConFuzzled again as we did last year remains to be seen, but let's hope we do!

Residential registration has already opened and nearly sold out, with only 37 “attending only” placements left at time of writing. Compare this to last year, when the last tickets were sold only weeks before the start of the convention. And all these sold before the events schedule is even announced.

The 2009 schedule is much the same as last year, with an opening day barbecue and the new “WikiFur PubQuiz”. One notable change is the Guest of Honour slot, this year occupied by Tabbiefox, and his cartooning workshop. The Furrylimpics is still a large part of the weekend line-up. Timduru’s FursuitTV makes a return too, followed on by QI parody quiz “Furry Interesting”.

One more guest of honour is due to be announced, be sure to get your place if you haven’t already!

Thanks to all the folks who put their ConFuzzled photos online, as well as the ConFuzzled staff themselves! 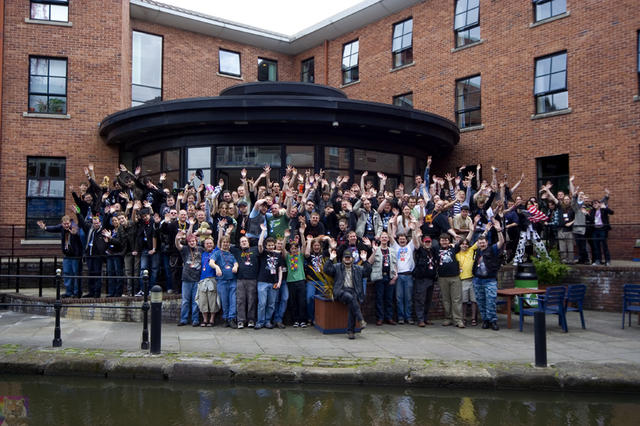 It was a cold, wet day in Manchester town on June 21st, but the atmosphere inside the Manchester YHA was as flaming as the residents of Canal Street just a few blocks away. Yes, the long awaited ConFuzzled is in town! And we here at The Furtean Times felt we should splash out a bit and report live from the convention itself, I mean, we have been documenting the rise of this homegrown convention since issue one; it was only fair we gave it a shot for a final finale.

One year of planning later and The Furtean Times is in the warm confines of the ConFuzzled hostel, a little damp from the unfortunately less welcoming weather outside; the newly renovated YHA in the Castlefield area of Manchester providing a much more inviting environment. In this one building there was 136 furs packed in to 35 rooms, served with top of the range facilities and events.

« To put it concisely, my opinion of ConFuzzled so far is as follows: Completely awesome! » ~ Fenrir

Thanks to all the folks who put their ConFuzzled videos, as well as the ConFuzzled staff themselves!

Saturday the 21st of June marked a significant day for Northern furries, the first UK convention outside of London, ConFuzzled. Of course, I had to wake up late. After a power-shower and a quick breakfast, I arrived in Manchester, meeting with Tori and Silentwulf, among others including Hyss and Istauri. I must say, I've never met quite a more friendly bunch of people, and this being my first meeting with a group from the fandom, ensured that my positive view on furries continued.

« It's been fantastic and hell to all the neysayers! » ~ Lazerus

Recent news from conventions near and far.

ConFuzzled sells out, as Eurofurence 14 opens its doors

ConFuzzled organizers were celebrating last night, as the newly-minted UK convention sold its last ten spaces.[1] The event is scheduled for June 20-23 at the Manchester International Youth Hostel, which holds 144 attendees, including 16 staff and 47 sponsors.[2] Most were charged £170 [US$340] (£210 for sponsors),[3] £135 of which covered YHA costs,[4] though the price was £10 lower for the first eight weeks.

Demand was even higher for rooms at late August's Eurofurence 14, which opened registration this Sunday.[5] Badge numbers over 600 were issued in the first 3 hours of registration, and a total of 760 had registered to pay by Wednesday morning.[6]