It was a cold, wet day in Manchester town on June 21st, but the atmosphere inside the Manchester YHA was as flaming as the residents of Canal Street just a few blocks away. Yes, the long awaited ConFuzzled is in town! And we here at The Furtean Times felt we should splash out a bit and report live from the convention itself, I mean, we have been documenting the rise of this homegrown convention since issue one; it was only fair we gave it a shot for a final finale.

One year of planning later and The Furtean Times is in the warm confines of the ConFuzzled hostel, a little damp from the unfortunately less welcoming weather outside; the newly renovated YHA in the Castlefield area of Manchester providing a much more inviting environment. In this one building there was 136 furs packed in to 35 rooms, served with top of the range facilities and events.

« To put it concisely, my opinion of ConFuzzled so far is as follows: Completely awesome! » ~ Fenrir

Sounds like a promising setting for the first fully residential furcon in the UK, and indeed only the second overall after RBW a few months beforehand. "It has been an absolutely superb convention so far," explains previous Furtean Times contributor Ember Komodog, "Nothing has gone wrong and everything has been to the standards of a world class event." Well, the attendees sure seem happy enough. The staff at reception and the bar are appear to be enjoying the event too, it's not the weirdest event the hostel has ever hosted (that award goes to the gay dentist convention a few years prior) but it's probably the most exciting. 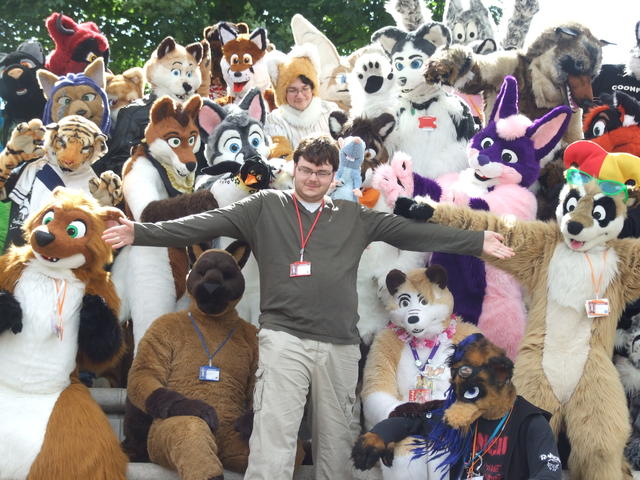 ConFuzzled has commonly been referenced as "the fursuiters convention" - to no surprise, a massive chunk of the programming is dedicated to fursuits: from photoshoots to a very special edition of FursuitTV, hosted by that ever popular meerkat, Timduru. We arrived at the con just before the start of the Furrylimpics, another fursuiting event in which two teams battled it out see which furs could perform meagre tasks under the sweltering heat and limited vision of a fursuit head. There were 67 suiters at the con, that's very nearly half, but only 12 of them would be going head-to-head for the Furrylympics.

The two teams, affectionately named by the audience as team "Dead Sheep Don't Say No" and the "Cheap and Playful Toys," had the relatively simple challenge of putting a jigsaw puzzle together - this would probably have been more civilised if many of them didn't resort to throwing plastic balls at each other. Either way, one had to feel sorry for Blacksnip, who especially struggled as his horse fursuit didn't actually have any hands... the race was close, however the Dead Sheep managed to pull forward and win by a tail-length.

After a short ballroom dance and jump around from cheerleader Yagfox (with appropriate pom-poms) challenge two was underway - the bone relay. This wasn't any normal relay race however, as each participant had to balance said bone on their nose. Many managed to do this pretty well, unfortunately for some suiters however - cheetahs don't have very large noses.

Challenge three was musical chairs, much simpler in manner, the competition between those remaining grew harsh. Playful remarks of "you're going down!" done in the mystical manner of charades that experienced fursuiters have long since mastered.

One round remaining and it's tight, the Dead Sheep team beating the Toys 2 to 1. The winner was to be chosen through the last round - one I affectionately named "Peg It". Why? Well, because it was a race to see who could stick the most pegs on to the chosen "victim" - some would think Blanko's enthusiasm to be chosen was a little peculiar, given the circumstances.

And here the Playful Toys drew level, beating their rival team by just 10 pegs. It would go down to a tiebreak situation... "You'd almost think they were prepared for this," joked Exiled Wolf, one of the ConFuzzled staff sat beside me. The tiebreak - a simple game of "get the hula-hoop over and under your body and to the end of the line as quick as possible" was speedily won by the Playful Toys, who clawed their way to the lead and also got the bonus of having the hottest suiter (cue the hip-thrusting) a cool 29 degrees.

« The dealers den was awesome, it's the only real opportunity to buy real furry merchandise. It was great to see my design on everyone's shirt. » ~ Azra, ConFuzzled t-shirt contest winner

In the short time we spent at the hostel we really managed to get a feel for what was going on. With an attendance of 100-plus people this was definitely larger than the biggest furmeet I had ever attended, and yet in comparison to the other conventions out there this was small fry. But maybe, just maybe, this is a good thing; everyone at this convention knows each other, a small convention in a geographically small country tends to do that - and it's this knowing of one another that give this con such a warm and cosy feeling.

It may be silly to be saying this to a con that I want to succeed and prosper, but ConFuzzled - don't ever grow up.