Beauty and the Beast that Never Was…

Who knew that Secret of NIMH director Don Bluth and his crew had their own version of Beauty and the Beast in the works? Well they did, back in the day, and we stumbled across some pictures from the project. According to animation historian John Cawley (from Get Animated), “Early in 1984, Don began in earnest turning the famous tale into an animated feature. He even announced it in the Fall of 1990 in his Animation Club newsletter. At the time, he described it as ‘a tender love story that says, ‘a thing must be loved before it’s lovable.’ We sprinkled this classic tale with a generous amount of comedy, a little bit of terror, and a lot of love. From Nan, the clairvoyant dog, Max, a bird detective, and Otto, an escape artist lizard, to the King Bats, the Wee Beasties and Queen Livia, herself, this picture has something for everyone.’ An American Tail also interrupted this production. As work began on Land Before Time, Don felt that Beauty and the Beast would be his first independent picture. However in late 1986, the Disney Studio announced they were working on a version and by 1989 had begun full production (for a 1991 release). Knowing his version could not be completed before Disney’s, Don dropped the project.” The picture below and others were recently uncovered on Tumbler. 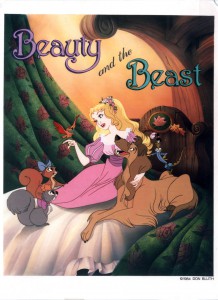 : Beauty and the Beast