Black to the Moon

Black to the Moon is a 3D CGI animated feature film from Europe, which recently premiered at the Cartoon Movie event in Lyon, France. Originally known as Blackie & Kanuto, it was directed by Francis Nielsen and produced in France, Spain, Italy, and Belgium (!). Currently it’s looking for distribution in North America. Here’s the storyline according to the Internet Movie Database: “Blacky, a black sheep, is the terror of the farm. And she is obsessed with going to the Moon. Kanuto, the sheepdog, gets tangled up in her plans while failing to hide his love for her. They get swept away in an adventure where they meet an opera-singing cow, a fashion designer wolf, illegal sewing spiders, a weird couple of birds from some famous singing TV reality show contest, and a peculiar pack of dogs, the ‘Pastrinos’, who have a rocket ready to launch. And of course, Pinky, the Godzilla-sized sheep, with a bad attitude of lunar proportions.” Seriously.  Maybe it’ll make more sense when you see the English-language trailer on YouTube. But then again, maybe not. 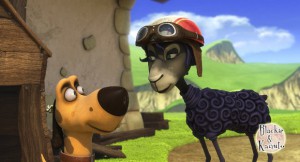