It’s called Three Wolves Mountain, and its’ a new black & white manga of the yaoi variety, created by Naono Bohra. We think that the description on Amazon summarizes it best: “Way up in the mountains, far from any major cities or towns, Kaya Susugi runs a small cafe by day and guards a haunted cemetery by night. Then, one night, he comes across werewolf brothers Taro and Jiro. Cheerful but klutzy younger brother Jiro quickly falls head over heels for the capable loner Kaya. What results is a dive into the hot, tail-twitching delight of werewolf mating season!” You read it here folks. It comes out in June from SuBLime, and obviously it’s Adults Only. 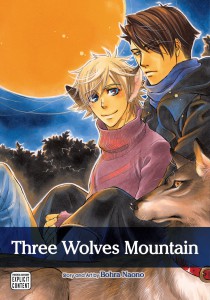