If you don’t know about the McKimson brothers, you should — especially if you love anything about 20th Century animation. Chuck, Bob, and Tom might not be the household names that Chuck Jones and Friz Freleng have become, but they probably should be as they had their hands in an amazing number of animation projects. Now there’s a new book by Robert McKimson Jr., I Say, I Say… Son! that attempts to fill you in on their amazing story. This new hardcover book is arriving from Santa Monica Press in early July, but here’s a preview from Amazon: “The first survey dedicated to the work of the McKimson brothers, this book offers a rare behind-the-scenes look at the upper echelon of 20th-century animation and examines the creative process behind the making of numerous popular characters and classic programs. Featuring original artwork from the golden age of animation, this book includes a wealth of material from many professional archives—screen captures, original drawings, reproductions of animation cels, illustrations from comic books, lobby cards, and other ephemera from the author’s collection—while surveying the careers of three groundbreaking animators whose credits include Looney Tunes, the Pink Panther, and Mr. Magoo. Beginning in the 1920s and then tracing the brothers’ work together at Warner Brothers Cartoons in the following decades, this history details Robert McKimson’s creation of such beloved characters as Foghorn Leghorn, the Tasmanian Devil, and Speedy Gonzales; Tom McKimson’s work at Warner Brothers, Dell Comics, and Golden Books; and Chuck McKimson’s long career working in comic books and then later at Pacific Title, creating animated film titles and commercials, including his award-winning work on Music Man, Cleopatra, and The Sound of Music.” The book’s forward was written by John Kricfalusi of Ren & Stimpy fame. 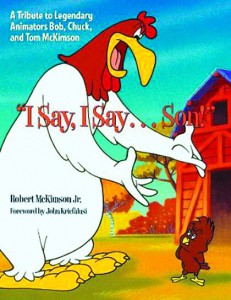