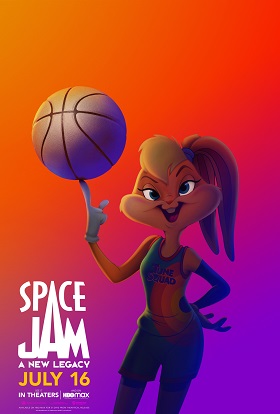 First things first, LeBron James does a much better job acting than Michael Jordan. It’s not even really about talent. James actually seems to be trying. He goes for emotions. He doesn’t always attain them, but he tries. Jordan was just kind of there. Furthermore, James is much more willing to be the butt of the joke. Both in live action and animation, he’s often part of the slapstick. He gets beaten up as a cartoon just as often as any of the Tunes. This is partially necessary, given the player. It’s hard to explain if you weren’t there in the 90s just how beloved Jordan was. James is popular, but not like that. Seeing him take a few cartoon knocks to the head may be necessary for fans of certain sports franchises he might have abandoned to enjoy the movie.

And James is presented as an imperfect person who is learning. This is one area of definite improvement over the original. The original movie’s story was about the Tunes basically kidnapping Jordan to solve their problem. In this movie, James assembles the Tunes in order to help him. It’s actually his story. There’s emotional involvement, believe it or not. Well, it's a bit like James' performance. It goes for emotions. It doesn't always attain them, but it tries.

The movie also gives a bit more emotional heft to Bugs’ story. The villain of the piece, Al G. Rhythm (Don Cheadle) has convinced his friends to abandon Tune World, and he’s a bit depressed by this. He uses LeBron’s need to form a basketball team as an excuse to get the band back together. There’s even a moment near the end of the movie that allows Bugs an actual legitimate hero moment, which is surprisingly his first real time to do something like that. 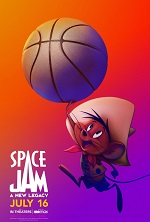 While the Looney Tunes that are featured are done fine, I’d say the franchise as a whole is better served by Space Jam. I mean, I’ve liked Lil Rel Howery ever since he stole every scene he was in Get Out, but I’d still rather have Hubie and Bertie as my announcers. Since the movie fills up its audience with various Warner Bros. properties in an obvious attempt at self advertisement, the number of Tunes who actually appear is way down. There are literally more Hannah Barbera characters in this Looney Tunes movie than there are Looney Tunes. That’s just wrong.

As far as the “Server-verse” concept is concerned, it boils down to during the “recruiting” section of the movie, various Tunes are inserted into various Warner Bros. movies; a very Looney Tunes gag, so I’m okay with that. Heck, there's a bit about Star Trek – not a Warner Bros. property, but the Looney Tunes do pop culture parodies. It's part of the deal. It’d be nice, however, if the jokes were a bit more funny. The first movie does, on the whole, a much better job being funnier.

The game’s audience is more distracting, but not for the reason you’d expect. They’re just an audience. As obviously commercial as these cameos are, they are least explained and don't feel as forced as the Disney cameos in Ralph Breaks the Internet, for instance. The problem is, in closeup, they look bad. Distractingly bad. They’re obviously extras just dressed up as these characters, and not well.

I’d also like to point out Lola Bunny (Zendaya), the single most controversial cartoon rabbit in existence, has the best recruiting scene, featuring a unique animation style. Her “lack of characterization” in Space Jam is also one of the critiques I never understood. Yes, her character can be boiled down to “likes basketball”, “likes Bugs” and “likes being a girl, but not, you know, girly”, and that holds true for this movie, but you can’t tell me characters such as Foghorn Leghorn are nuanced. Dude’s an anthropomorphic Southern accent disguised as a chicken.

But, speaking of Lola’s characterization, fans of her Looney Tunes Show version do get a bit of an Easter egg. And there were a couple nods to the original Space Jam that had me doing the “Leonardo Dicaprio in Once Upon a Time … in Hollywood” thing (this time, the trailers didn’t ruin it!). Perhaps the greatest Easter egg, however, is the role played by Tune Squad member Penelope Pussycat, who only appears in the cross-promotional marketing, and not actually in this movie.

Which makes her the single most important member of the team. Cross-promotional marketing is the point, after all!

Back when King James was rocking it in his early career, people were saying he was going to be the next Jordon.

Clearly this is what they had in mind.

One of my biggest criticisms of the original Space Jam was how it was made by people who had no idea what basketball was. I had strong hopes for this version especially after the thrilling opening credits. While I think this Space Jam had slightly more love for basketball in it, it certainly wasn't enough to make a difference. LeBron's better acting aside (and I remember his rookie season Nike commercials--he can act just fine), I really wish the producers had tried harder with this one. This is just 1996 with cheaper CGI.

Though I deeply enjoyed the closing credits' pictures of toons playing sports with real stars.

There's a name I haven't seen in awhile.

Yeah, many have pointed out this is more a Warner Bros advertisement than basket ball focused. Which is, as you note, true to the original.

I forget when you started your furry fantasy basketball league. I think it was around the late 90 or early 00s? Was there any premise of "What if Space Jam actually cared about basketball as a sport?" to it?

Gosh, no, not THAT long ago. I created Buck Hopper in 2008 and the FBA as an open project in 2009. But even that many years after the release of the original Space Jam most everyone saw basketball-playing rabbit and immediately thought of the movie. Space Jam occupies that truly unique place of being utterly awful in quality and yet completely embedded in culture like Red Dawn, Weekend at Bernie's, and Point Break.

The bitter truth is that the overlap between cartoon fans and sports fans is too small to overcome Hollywood's devotion to Canoga Park's 17-year-olds, so the truly basketball-focused cartoon I've dreamed of is unlikely to be produced, even if b-ball's popularity is growing rapidly worldwide. I had hoped this version would show more courage than 1996's, but instead it wasted a genuinely more interested NBA player on a showcase of generic computer-inspired CGI that would be more at home at a remake of WarGames or the Matrix.

And, man, I never thought I'd see a movie squeeze more from its studio's IP vault than Ralph Breaks the Internet. Well done, WB. Well done.

So, I missed it, but there is Wolfwalkers shout out in the movie. A character is reading Variety magazine in an early scene, and the cover story is on Wolfwalkers.

This is actually pretty cool, because it's neither a cross promotional marketing ploy (Cartoon Saloon is not in any way associated with Warner Bros., and is in fact exclusive to one of HBO Max erstwhile streaming rivals), nor is it a parody, like the Star Trek moment noted in the review. It seems to be a genuine shout out with no motivation beyond somebody wanted to.

Remember how much Chuck Jones loathed the first Space Jam?

Chuck Jones also hated Who Framed Roger Rabbit. I keep telling you guys, he hated EVERYTHING. Him hating something isn't the big slam you think it is.

As usual, The Onion has its own take on things. This is a topic where appeal is geographically-limited, which may be part of why a sequel took this long. I've seen basketball a few times on BBC Sports, and played a few times in the USA, but found it hard to get into. But then, that's true of rugby, cricket and football. I guess I'm just not much of a team player?

Nuka's furry research group indicates that they use Sports Fandom as a control for Furry Fandom when it comes to doing research as there is little overlap between the groups.

The only reasons I know Sports rules as well as I do is because I took them in PE class and would play sports video games against my brother. Back when it was about the sport and not the pay-to-unlock players to manage your fantasy team...

Cricket's the one I just cannot understand the rules.

Apparently the "big chungus" reference was not intentional as the scene director was unfamiliar with the meme, but was a reference to the scene of the originating cartoon.

The Tweet's already been deleted, but the general consensus seems to be the animator was unaware of the Big Chungus meme, but not necessarily the writer. I will say Big Chungus is "off model", though.

If the guy was familiar with the original short, Wabbit Twouble, he was probably wondering why Bugs was the one who was fat. The irony of that moment in Bugs' career getting the meme treatment is that he is mocking Elmer Fudd, who was actually redesigned as a big fat guy for a couple shorts before thankfully reverting to his, well, not thin, but certainly not that big, self.