Canines to the Rescue — Again!

Squarely in the “It’s about time!” department: Warner Brothers Home Video has announced the release of Road Rovers: The Complete Series on DVD later this month. “Meet ‘Cano-sapien’ the next, heroic step in the evolution of man’s best friend! After the evil General Parvo unleashes Professor Shepherd’s inventions upon the world, mutating dogs into monsters, Professor Shepherd recruits an international team of canines and transdogmafies’ them into super-heroic, humanoid crime-fighters.” That description barely scratches the surface of just how completely odd this popular anthropomorphic cartoon series from the 90’s could get. So head on over to the Warner Brothers web site and check it out. And remember: Don’t be weird boy! 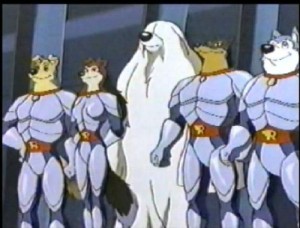 I think I know what I'll be seeing at Prancing Skiltaire soon... and at Califur this year.

Also, I bet $25 that this series will get a movie adaptation...

and the director's last name is a synonym for the word "harbour."