The Lady and the Wolf

Kyell Gold is a well-known author of anthropomorphic fiction. How well known? He currently holds the record for the most Ursa Major Award wins by an individual — for novels, short stories, and story collections combined. Usually his work is known for two things: Eroticism, and a male-to-male emphasis. However, his latest novel is considerably more straight — straight romance, and straight horror. The Silver Circle tells the story of a woman named Valerie, who heads off into the woods on vacation after a messy divorce.  She’s determined to try and relax, in spite of the warnings of deadly wolves infesting the forest. Then, she comes across a mutilated dead man, a young man with an arrow in his side… and a hunter who insists that the wounded young man is a werewolf. From there, things get complicated. The Silver Circle is being released as a Kindle e-book from Amazon Digital Services this month. 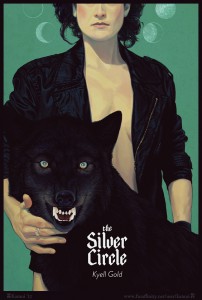