It’s time for the world — or at least Furry Fandom — to re-discover the works of Frank Cho. Or at very least his seminal work in comics, Liberty Meadows. This well-known comic strip started life as an outgrowth of University Squared, a comic strip that Frank worked on during his college days. Liberty Meadows tells the story of a terribly beautiful human named Brandy, who works as a psychiatrist at the Liberty Meadows animal sanctuary. But it also tells the story of Brandy’s decidedly anthropomorphic animal friends: Like Ralph the miniature bear; Dean the lecherous pig; Leslie the hypochondriac frog; and Truman the very, very nice duck. The strip was syndicated for newspapers from 1997 to 2001, when constant censorship by his editors convinced Mr. Cho to switch to a comic book format — which was self-published at first, then later came out of Image Comics. During that time as a newspaper strip however, Liberty Meadows produced several full-color Sunday strips. And now those strips have finally been collected in the Liberty Meadows Sunday Collection, coming this June in hardcover from, yes, Image. You can find out more about Liberty Meadows — and read the current, un-censored strip — at Frank Cho’s official web site. 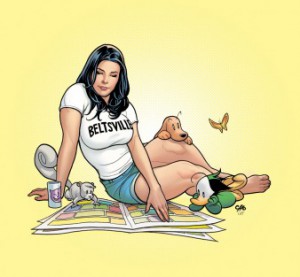