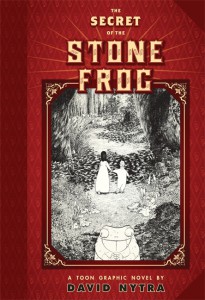 The July issue of Animation Magazine featured the 2012 Pitch Party, which has become an annual event.  The idea is simple: Entrants purchase a 1/16th-page ad in the magazine, and submit a one-panel “pitch” for a new animated TV series or feature. A panel of animation industry experts, the staff of Animation Magazine, and on-line readers each get a chance to pick their favorites.  Those industry folk this year included names from Cartoon Network, Nickelodeon, PBS, and the Hub among others. And the top pick from both those bigwigs and the Animation staff was Jimmy Legs: The Down and Out Frog, created by Daniel Contois — the story of a cartoon frog living in America following a nuclear apocalypse. Oh what fun! It’s time for the world — or at least Furry Fandom — to re-discover the works of Frank Cho. Or at very least his seminal work in comics, Liberty Meadows. This well-known comic strip started life as an outgrowth of University Squared, a comic strip that Frank worked on during his college days. Liberty Meadows tells the story of a terribly beautiful human named Brandy, who works as a psychiatrist at the Liberty Meadows animal sanctuary. But it also tells the story of Brandy’s decidedly anthropomorphic animal friends: Like Ralph the miniature bear; Dean the lecherous pig; Leslie the hypochondriac frog; and Truman the very, very nice duck. The strip was syndicated for newspapers from 1997 to 2001, when constant censorship by his editors convinced Mr. Cho to switch to a comic book format — which was self-published at first, then later came out of Image Comics. During that time as a newspaper strip however, Liberty Meadows produced several full-color Sunday strips. And now those strips have finally been collected in the Liberty Meadows Sunday Collection, coming this June in hardcover from, yes, Image. You can find out more about Liberty Meadows — and read the current, un-censored strip — at Frank Cho’s official web site.

I thought it was a typo when my coworker informed me she had seen an advert claiming former Beatles member Paul McCartney had written something with "Furry" in the title. It seems as though it should say "Urban Fairy Tale," a common enough phrase.

Semantic quibbles regarding the differences and/or overlappings of furries vs fairies aside, it is indeed furry, and "is about two squirrels and a frog, who embark on a mission to set free some animals" (per Bookinformation.co.uk).

More info at the above URL, Billboard.com, or just Google the title.

BBC On-line reports the discovery of a species of purple frog in western India. Nasikabatrachus sahyadrensis represents a previously unknown branch of the amphibians.