Daniel and Dawna Davis, known collectively as Steam Crow, refer to themselves as “a husband and wife team based in Phoenix, Arizona, who make friendly monster-inspired art, prints, books, and other oddities”.  With a weird sense of humor and an extreme graphic-arts style to boot. Their books include Caught Creatures, a book of “monster haiku”. You can find that and much more at the Steam Crow web site, as well as a blog updating the latest of what they’re working on — and what’s the next convention or festival they’ll be appearing at. 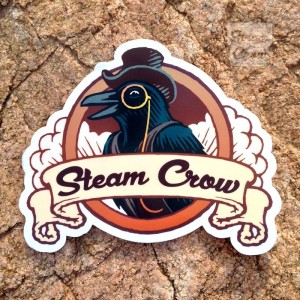 'The Day of the Crows' is not anthropomorphic - or is it?

The Cartoon Brew website has posted the trailer for the forthcoming French animated feature, The Day of the Crows/Le Jour des Corneilles, directed by Jean-Christophe Dessaint, to be released on 24 October.

The synopsis says nothing about it being an anthropomorphic feature, but the end of the 1:56 minute trailer (at 1:31) shows brief glimpses of animal-headed people in the forest – a tiger-man, a lynx-man, a horse-man, a frog-man, a deer-woman - “the ghosts haunting the forest”? The film reportedly received a standing ovation at the 2012 Annecy Festival.

Going by the trailer in French, this animated cartoon feature does not have enough anthropomorphic scenes to be called an anthropomorphic feature, except by very diehard fans – but, as I always say, watch the trailer and decide for yourself. Nothing is said about a forthcoming English-language release.

People, including scientists, have wondered for ages how intelligent crows are; alternately, under what conditions crows (or other animals) ever use tools as humans do. A recent video, shot at long distance in an uncontrolled situation, shows striking evidence of this. A crow finds a jar lid and takes it up to a snowy rooftop, where it stands on the lid and sleds down the roof. It then picks up the lid, returns to the rooftop, and sleds down again. Repeatedly.