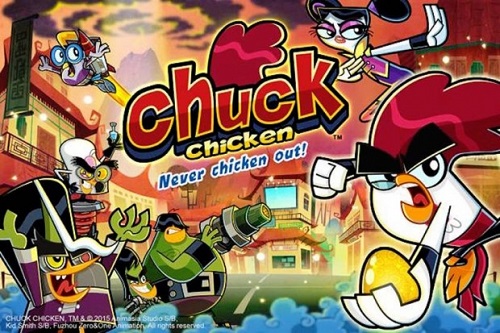 Sorry, sorry… It’s called The Chicken Squad, a series of light-hearted mystery stories written by Doreen Cronin and illustrated by Kevin Cornell.  “Meet the Chicken Squad: Dirt, Sugar, Poppy, and Sweetie. These chicks are not your typical barnyard puffs of fluff, and they are not about to spend their days pecking chicken feed and chasing bugs. No sir, they’re too busy solving mysteries and fighting crime.” In The Chicken Squad: The First Misadventure, “… when Squirrel comes barreling into the chicken coop, the chicks know they’re about to get a case. But with his poor knowledge of shapes (‘Big’ is not a shape, Squirrel!) and utter fear of whatever it is that’s out there, the panicky Squirrel is NO HELP. Good thing these chicks are professionals”. Following all this? Check out this new book series from Atheneum Books for Young Readers over at Amazon, in one of several formats.

[Hey, don't forget! You only have one week left to vote for the Ursa Major Awards -- the Hugo Awards (tm) of anthropomorphic fandom! Visit www.ursamajorawards.org to find out how.]

This week I accidentally stumbled across two animated shorts, both from the DailyMotion Talking Animals account. The first, Chicken Wings by Pauline Kortmann, is described like this:

Once upon a time, when the Wild West was still wild, a Cowgirl and a Werewolf travel the hostile land. As a chicken walks their way a fight about the appropriate use of it makes them forget the danger around, till it seems to be too late.

The second, Flamingo Pride, directed by Tomer Eshed, is "The story of the only heterosexual flamingo, in his desperate attempt to find love." It's not entirely safe for work. 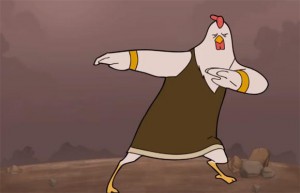 Return of a Truly Killer Chicken

Look, we just can’t make up some of this stuff, folks.  Here, this is from Image Comics: “Still kicking yourself for not ordering and/or passing by Chew #1, now that you see what it’s going for on eBay? Here’s your chance to get sweet, sweet, revenge, with an all-new Chew #1, a one-shot spinning off Chew‘s most popular supporting character, and comics’ most beloved homicidal cybernetic kung-fu rooster. Concentrated mayhem. Feathers, rage and hate! Plus: an all-star pin-up gallery from some of the most staggeringly talented artists in the industry!” The main artist for the Chew: Secret Agent Poyo full-color one-shot is Rob Guillory, and the writing is by John Layman. And the chicken is coming our way July 11th. BleedingCool.com has a background article, including interviews with the creators, if you want to try and figure this thing out. 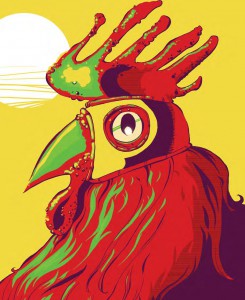 A chicken known as J-Lo because she was born with two rear-ends has been killed by a fox, ocala.com reports. The chicken – who had a large backside covered by white feathers – become a national sensation when news of her double lady-lumps spread over the Web.

As reported by the Ocala Star-Banner:

The couple brushed the feathers away and found two pubic regions, spaced about two inches apart. Typically, there is one such region in the center with a single orifice.

J-Lo was previously in the news in January, when her owners brought forth the extraordinary clucker. Even Jay Leno cracked a joke as the double-bottomed chicken went viral.

We bid ye farewell, J-Lo. You just had too much junk in your trunk to be in this world for long.

The Fission Chicken creator and former Critters contributor has returned from an unexpected hiatus which turns out to have been due to a quadruple bypass. [oldhans117/furryne.ws]