The Cartoon Brew website has announced the closing of its fourth annual Student Animation Festival. The Grand Prize winner is “Brain Divided”, a five-minute CGI film directed by Josiah Haworth, Joon Shik Song and Joon Soo Song at the Ringling College of Art and Design in Sarasota, Florida.

Can animators anthropomorphize the brain functions known as the id and the superego? Surely, going back to Disney’s Reason and Emotion (1943), probably most famous today for the animators’ caricature of fellow Disney animator Ward Kimball as the caveman Emotion. There is also the 1956 s-f feature Forbidden Planet with its “monsters from the id”, although the id there technically is not anthropomorphized; it’s just shown running amok. It’s not done often, thank Roscoe, or it would get old fast; but Haworth & Co. have done a fine job of it. 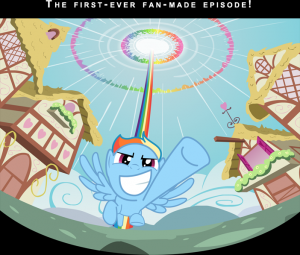 In July the Cartoon Brew website brought us The Legend of Poisonberry Pete, a 5’:41” CGI student film Western featuring anthropomorphic pies, muffins, quiches, and other baked goods. Here now is Paddy Pan, a 2D student film about an anthro cupcake wannabe who doesn’t want to be baked.

3’50” by Andrew Bowler at Quantm College in Melbourne, made with Flash, Maya, and After Effects animation.

The Cartoon Brew has posted Bare, a 2011 graduation film by Helen Dallat of the University of Wales, Newport, about an unusually fussy bear in the woods.

The only bears in the woods that I have known have s---, didn’t use any toilet paper, then sat down in their own mess – but presumably an anthropomorphic bear would be more fastidious.

The Cartoon Brew website has posted Metro, a 2011 student film directed by Jake Wyatt and produced by him and others at the Brigham Young University for Animation.

It is a 4:45 minute cartoon that does not become anthropomorphic until its last moments, but it is a charming animal fantasy for most of its length.

The sad story of a teenager who turns into a duck.

A 2:40 minute student film by Cody Walzel of the Pratt Institute.