Animation: The 'Clangers' are returning

From 1969 to 1972, BBC-TV presented a series of 26 10-minute stop-motion animated children’s episodes about the Clangers, tiny pink mouse-like denizens of another planet, and their cook, the Soup Dragon. The series was popular with British children and parents alike.

The Cartoon Brew has announced, in an article by Neil Emmett, that Clangers (or The Clangers) will make a comeback in 2015, with 52 new episodes for CBeebies in Britain and the preschool channel Sprout in the U.S. The new series will be produced in stop-motion animation of knitted puppets by Peter Firmin, the original puppet maker and puppeteer (now 84), with writing supervision by Daniel Postgate, the son of the creator and original writer, Oliver Postgate. The article contains one of the original 10-minute episodes.

Animation: 'The Boxtrolls'; are trolls anthropomorphic?

A stop-motion feature coming from Laika in Portland in September 2014. I dunno; they look more like really ugly men wearing cardboard boxes to me. But, just in case, here’s their first trailer, from Animation Scoop and Cartoon Brew (which also has the movie poster). Shaun the Sheep to get big-screen movie

Shaun the Sheep, the ovine character created by Aardman Animations, is set to get his own movie.

Shaun first appeared as a supporting character in Aardman's 1995 A Close Shave, and later got his own children's television series. Now, Aardman is to join with film-TV group Studiocanal to make Shaun's full-length claymation film.

Aardman will produce the film, written and directed by Richard Starzak and Mark Burton. The plot concerns Shaun's mischief inadvertently causing his Farmer to leave Mossybottom Farm. Shaun, Blitzer the sheepdog, and the rest of the flock must go to the big city to rescue him. Animation: 'I Have Your Heart'

The Cartoon Brew has posted a new animated music video, “I Have Your Heart”, about a forbidden romance between a human girl and an anthropomorphic cat-man lover.

The 4’25” video is apparently not produced by an animation studio, but by three people; New York cartoonist/paper cutout artist Molly Crabapple, music composer Kim Boekbinder, and Melbourne stop-motion animator Jim Batt (and a small staff); it raised $17,280 on Kickstarter.

The Last Bus Out

It’s known as Posledny Autobus, which translates as The Last Bus. It was created in the Slovac Republic by Martin Snopek and Ivana Laucikova. It features human actors wearing animal heads, animated in stop motion. And here’s its description: “It’s the start of the hunting season. The animals of the forest board a small bus and flee to safety. When hunters stop the bus in the middle of the night, its passengers reveal their true natures in fear for their lives.” We don’t know what else we can tell you about this, other than to show you this little clip from Vimeo. This short film has already won several film festival awards in Europe. 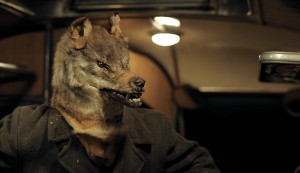 A fish in a refrigerator sings Caruso. The stop-motion short-short – a trailer for his Annecy International Animation Film Festival award-winning Una Furtiva Lagrima – is less funny than animator Carlo Vogele (Pixar’s Brave, etc.) as he explains how he animated the dead fish.

After purchase of the bass at the fishmarket, I’d stick it in the freezer until I was ready for a full night of animating (stop-motion 101: if you want consistent lighting, daylight is not your friend ;-D). […] So I’d animate as fast as I could, until the fish thawed completely and its jaw went slack…

From where else but the Cartoon Brew.