Fastest Fox in the West

Mandi Tremblay (also known as the artist Mitti, creator of Peachy Keen) has a new on-line graphic story in full color, Lucky August Carson. It goes like this: “On his first day as a small town sheriff, August Carson’s got caught in the snare of Freddie, the legendary Bandit Queen, who kidnaps him for her own mission. Can August survive the Mojave Desert, or is there more to Freddie than she’s letting on?” Find out at the official Lucky August Carson web site. 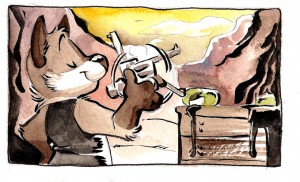