This is a bit complex, so we’ll let Animation World Network explain it: “Nickelodeon has released a handful of first look images for Bossy Bear, the new animated preschool series from husband-and-wife team David Horvath and Sun-Min Kim (UglyDolls, Tea Time Cats), based on the Korean / U.S. pop culture blend book series by Horvath. The series follows the misadventures of unlikely besties Bossy Bear (an overly enthusiastic extrovert) and Turtle (a thoughtful introvert) in their Koreatown-inspired city of Pleasantburg.” Look for the show on Nickelodeon and Nick Jr. in 2023. [And have a happy and safe New Year’s Eve!] 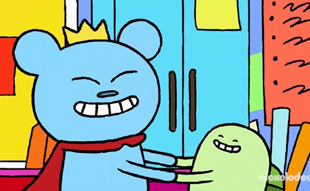 Anthropomorphic jackals, wolf-men, horses and wild boar - all made of used tires, resin, steel and foam. These are the work of Yong Ho Ji, a Korean whose art has toured the world, from Seoul to Amsterdam.

Yong, who has an M.F.A. in fine arts from NYU and a B.F.A. in sculpture from Hongik University in Seoul, originally formed his pieces from welded iron bones, wooden planks and soil, overlaid with tires, before turning for a while to death-castings. Nowadays, he works in tire-wrapped resin formed on plaster molds.

Within the medium, there is great scope for choice in materials, as noted by Trinie Dalton:

A deer's tender cheekbones and muzzle are rendered with lightly treaded road-bike tires and smooth inner tubes, lining its eye sockets and nostrils to conjure a quizzical expression. The burly neck and forehead of a steadfast rhinoceros uncannily resembles a real rhino's bust because of the broadly treaded tractor tires peering out, like anger-strained tendons, from beneath a rough outer skin made of motorcycle tires.

Some species seem more popular than others; his gallery displays a multitude of deer and eleven models of shark, but only one mink. Herbivores feature on an equal basis - there's even a zebra. [tip: JayGryph]

Dog meat, a long time traditional food of many cultures, has been outlawed in Korea, but legislators want to push a bill to change that. They say the lack of regulation leads to the inhumane killing and unsanitary handling of dogs in markets currently, which in turn is the primary target for the animal activists against the practice. The opposition to the bill is not only comming from Western animal rights people, but humaine groups in the country as well. Similar bills have been unsucessful.

Korean website speaks out against consumption of dogs and cats....

The Korea Animal Protection Society is an organization dedicated "to preventing cruelty to and educating people about animals." It was founded in 1991 by Sunnan Kum, who is attempting to extend the benefit of a caring shelter to animals that are still being raised in illegal "dog farms" for butchers (a 1991 law prohibits the consumption of dogs or cats). Evidentally she faces quite an uphill struggle, as her organization has had to euthanize several animals that were in the her care and termed untreatable, something that the Korean culture treats as essentially taboo, "...even if the animal is suffering. Many Koreans believe any life, however bad, is better than death."