Death's Door - Turns out death is actually a great adventure 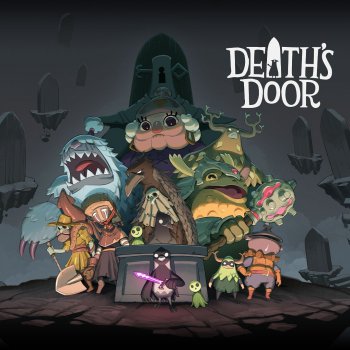 Death’s Door is a game where you play as a crow who has been tasked with reaping a soul. However, things become complicated as someone rips one of your assigned souls from your grasp. This leaves you on a quest to hunt down some monstrous beings who are doing everything they can to stall their egress from the world of the living.

Gameplay-wise it has the exploration and dungeon crawling elements of a Zelda game. However, the large boss fights are punishing and far more difficult than the Nintendo faire. They seem closer to Dark Souls boss fights in terms scale— but not quite as brutal, a nice moderate difficulty.

I honestly hope this one wins the Ursa Major award for gaming in 2021.

Usually, I don’t have a horse in these races, as most of the games I get an opportunity to play are in a backlog from prior years. Luckily, as a furry, I don’t ever feel compelled to keep up with the Joneses of the world and consume the latest titles. Instead I play anthro games as my audience votes on which one they would like to see me play. So it is rare that I get to play a game in the year it came out.

This treat of a game was published in July of this year, developed by Acid Nerve and published by Devolver Digital. It is available on PC and XBox consoles. And this October the voters decided this would be a good game to play. You know, death is spooky. However, the game is not of the horror genre.

But why does the word death convey horror, though? It’s something that many people try to put off and despise because it usually means your game is over. People spend a lot of energy and money in their adult years trying to be known or live beyond their time. And that theme you’ll find in this game is the lengths that some souls will go to escape death, and the negative impacts that those who stay beyond their years have on those in the world.

Confronting the cycles of life and death, and their impact on those around us is quite a timely theme. Given that most of us know someone that has passed on in the past few years due to illness.

But don’t think that just because the theme is death that the game is grim. There is very much a sense of fun as the characters can be quite silly. Every boss fight ends with a eulogy. This event makes those fights feel like there was a weight of accomplishment, with each speech having a different personality to them depending on the foe you dispatched.

The characters are colorful and interesting, and the art style for some of them show an inspiration from Studio Ghibli. This is especially true of the Urn Witch, with her portly cheeks and large dark eyes. The world environments are also surreal, but grounded. The layout of the worlds are realistic and make sense for what they are trying to convey. Mansions feel like mansions, with sprawling courtyards and interconnected guestrooms and a luxurious bathroom whose floors are so clean you can see the room more clearly within it. Swamps are large and flat with elements of a world long lost to the dampness and decay, yet the gameplay is still layered even in these barren environments.

There is actual architecture to level design as you can sometimes see other rooms below the one you are in through openings in the floor. These situations ground you into the feeling that you are in an actual place and not just disconnected rooms in a video game, even though that is what they are.

There are also many secrets interlaced in all areas of the world that will require you to return when you have acquired the abilities to access them, but they are never so obtuse that you will miss them if you aren’t looking for them. This is a game where you can find all the secrets without referring to an outside walkthrough, as in the later part of the game there is a character that will give you vague hints on where to begin searching for some of the more difficult secrets. Those being temples that will increase your life and magic meters.

After you beat the game, the portal doors you use to traverse to the worlds you travel will be highlighted in a purple hue if you missed some goodies. So your completionist can shine if you want it to. And while not one who is a completionist, this game is one I enjoy the world so much that it’s not a chore to attempt it.

The lighting effects are wonderful, especially in some moments where your character projects shadows on the walls, giving your character a sense that they are actually within the world. Lighting is rarely something I would think of in a third person isometric game as being important, but it shines here.

The soundtrack is simple, but vibrant. Complimenting the atmosphere of the places you visit. One stand out is for an area called the inner furnace that has an industrial wavy theme which is not going to hit the same in the sourd track as within the game itself. Because the sounds of the piston platforms in the games are timed in such a manner that it creates an additional underlying beat in the song. It’s a hard thing to describe in words, but as soon as you hear it and see it you know that there was great communication between the developers of the music and world builders and that they were not just making these elements separately.

Combat that evolves with your character

Your ability to access the environment is not the only thing that increases over time, but also your ability to approach combat. You have four skills that you will acquire over the course of the game, and those skills all have a role in how you approach conflicts. As these new abilities are honed, you find yourself going from a simple fighter slashing and dodging, to a harbinger of death able to close the gap or take out enemies in a line with furious fire. Each ability has a very distinct upgrade hidden in the world that modifies its utility to make it all the more useful.

However, combat is never mindless. You have to think very carefully when you strike and how you strike. Mistakes made are not so easily healed as it would in a more Zelda like game. The only health is from flora you plant in pots, and that is only useful once per visit to the world in question. Checkpoint doors can also heal health.

Though when you are in boss fights there will be no retreat, you only are going to have 4 - 6 hits you can take, depending on the amount of shrines you found.

Then there is how your magic meter is managed. It is only restored by physically striking something that takes damage. This is either by striking an enemy or a destroyable item in the environment. So you can’t just spam magic and restore from a distance. You have to use your ranged abilities when you can, and then wait for an opening to strike and restore yourself so you can use those ranged abilities once more.

Every hit taken and given feels earned, and all enemies have weaknesses to exploit if only you have the patience to do so.

I should probably make a criticism, as I note there is a lack here. The inability to cycle through the abilities using a mouse wheel can sometimes make changing abilities clunky as they are each assigned a number key 1 - 4 on the PC. On the interface these are not displayed in a straight line to signify a row of keys, but on a wheel. A handful of times I wheeled the mouse to have nothing happen, so to not have that be an option feels unnatural.

This game can easily fly under the radar in our oversaturated markets of titles we see from mainstream and indie developers alike. I rarely say that a game is a requirement, but this game takes so many elements from different games and puts them together in such a tight and vibrant package, a gamer would be remiss not to play this one and explore the world as a reaping crow. For this game has quite the hook. And as Hook knows, death would be a great adventure.

I end by noting I have not completed the game 100% (at about 93% as of this writing). I suspect that there is going to be a true final boss when I get to 100%, and through cues in the story I believe I know who it will be. This game is very good at telegraphing what things are coming up, but it doesn't feel spoiler-like since just experiencing what you knew was coming is a joy in itself. I really wonder how the game will handle a defeat of this theoretical boss.

And that gives me motive to continue playing this off stream and beyond the credits.

Which by the way crashed during my stream, pay your respects indeed.

Link to the Stream Playthrough (up to credit-roll, not a completionism run):

Dammit, I was trying to remember the name of this game 36 hours ago in a conversation and couldn't remember!

It's always fun to mod for the stream, but this one was a particular pleasure. I might add that this game will have a strong appeal for anyone into noir satire. I didn't share this there, but I got some strong correlation to the narrative and visual atmosphere of Terry Gilliam's Brazil. The central office where you pick up assignments and evaluate your status would fit right in that movie. The "World's Fair" mechanics and the black-and-white-based palette contribute well to the general view that soul-reaping is just another job in the final wash. This was truly a solid experience.

I don't know if it will win the Ursa, it is my hope it will.

Yes, even over DeltaRune Chapter 2.

It's just a personal preference in the kind of games I like, and it's a complete package.

Never really got into the Undertale series, though I do know that it has an active fanbase and its meme-ability gives it a share advantage [Insert gamer bird character smug face here].

As I said, somethings get lost in the shuffle. No one streaming this game is going to make a meme moment.

Other then me calling out the Grey Crow as a Boomer claiming I was "Free to do what I wanted" after forcing my character into a 'do this or you die' scenario.

And one frog boss has a reputation on sitting on people.

But character personality wise, eccentricities are what the *Tale series does quite well.