This year, I heard that many furries attended separately. The scale of everything made meeting tough. As far as I know, I and Trip Collie were the only ones who met to go in fursuits. I'm lucky to live mid-way in walking distance between two main events, which gave us easy access.

Both events we went to were super fun and exciting, but not without danger. Wearing a fursuit makes a person somewhat deaf, blind, and vulnerable, and a target for attention, good and bad. Mix any kind of crowd with alcohol, and there will be a small section of aggressive assholes trying to ruin things. I'll highlight those negative parts as cautionary comments, keeping in mind that every bad thing was outmatched by an explosion of fabulousness.

I suited up for the Pink Saturday party in SF's Castro district, on my own plus a spotter. It's described as San Francisco's largest underground street party. One of the sound stages had Jovino Bunny DJing good tunes from new wave bands like Devo.

The streets were blocked with barriers and security to keep out weapons or public alcohol (the party was made dry in 2011). That didn't put obstacles between people and their booze. A 7-11 just outside the barrier was lined up with drinkers, and so were the private bars inside it. One of my spotter's jobs was to protect me from putting my paws in barf or glass on the street, with my limited vision in suit.

Entering the crowd in suit was like being dropped in a tank of sparkly rainbow piranhas. From one end of the blocks-wide party to the other, we couldn't move ten feet without being swarmed on all sides by drunk people competing to get photos with me. I believe it was 2:1 girls vs. guys (coinciding with the Dyke March, infected with enthusiasm for furries. It was amusing to see some boyfriend jealousy when girls wanted hugs). Finally, we made it to dance in front of Jovino, who came running out of his DJ stand to give me a hug. What a great guy! Several super cute partners made the dancing unforgettable. (This happened.)

Not having a place to rest became stressful. After 2 hours we found a dark side street outside the party, with a railing to rest on while I took off my head. A small group was having a BBQ on a porch nearby. They used a megaphone to joke at people looking for a stealthy pee in the shadows: "WE CAN SEE YOU." When they saw my Husky suit, they called "RELEASE THE HOUNDS". They were cool, and invited us into their house to use the bathroom (the next best thing to a hydrant for me).

The reactions to a fursuiter were overwhelmingly enthusiastic. Even when drunk, most people were at least nice. I sensed no "anti-furry" attitudes besides a few looks and grumblings. As far as I can tell, negativity happened simply because the suit was attention-getting, and it came from a small set of over-aggressive drinkers. Among them: I had to tell several girls not to pull my head and try to see under it. I had to yell at a guy to make him quit potentially damaging my ears. I got taken down by a trashed but friendly guy, and the sidewalk caused a big scratch on my nose to repair. A couple of guys came in for a photo, and one wanted a hug, then his stupid boyfriend turned around after the photo and grabbed me roughly for doing it. Walking home through San Francisco's Mission District in a fursuit at 1AM was one of the more harrowing things I've done recently. Two homophobic dudes almost got into a fight with my spotter, and I had to get everyone to walk away (it might have been a good idea to minimize our own moderate drinking). When I got home, I gave my suit good maintenance to get rid of the marks from body painted boobies. Folex carpet cleaner worked wonders for that.

The next day was the day of the Pride Parade and after-party in San Francisco's Civic Center, with musical acts, performances, speeches, booths, and food. Trip Collie and I suited, and one spotter came along. It was even larger than Pink Saturday, but earlier in the day, so the drinking didn't go wild until later. First, we enjoyed interacting with hundreds of photo takers and posing, posing, POSING! Beer was open, so an important spotter job was to hold cups and cameras while people posed with us. The heat was not too bad, but it was still important to get out of direct sun. We had to flee for shade while being bombed with requests. We were lucky to find a cool alcove with a half dozen cops, who made it a good place to relax and take off our heads. As soon as heads came off, it was like flicking a switch that made us ordinary people. The instant heads went on, we were magnets for photo takers.

After a while, the crowds got too intense. Three or four drunken barbarians treated Trip like a hurdle to jump over, and one bashed his nose. We put our backs to a wall, and were treated to pro photos for a San Francisco tourist guide. Shred appeared for a surprise hug and melted back into the crowd. A panic made a few dozen people run away from the zap sounds of police tasers. We decided it was time to find the nearest exit. I miscalculated and led the three of us into San Francisco's Tenderloin neighborhood, known for drugs and flophouses, where there was a stabbing during Pride (but not related to it). The Pride-goers mixed with gang-looking groups, and I was bashed on the back of the head and punched in the nose (my well-built suit took no damage). As we escaped, we were followed for several blocks by creepy people in a car begging for photos, until we were clear of the crowds.

Like a horror movie with a fake ending, where the monster comes back for one more ooga-booga moment, one last drunken hug zombie appeared. He jumped on me with a bloody road-rashed arm. Thankfully I stayed unstained and uninfected until the hug attack ended. Afterwards, over sangria and oysters, Trip reminded us that he made it through the gauntlet unscathed while wearing a shiny, expensive camera in a chest harness.

The fun and smiles were worth it, despite giving me a sleepless night of PTSD-like flashbacks of being attacked. It made me imagine adding some sort of defense to my suit, like stun gloves (as far as I can tell, those aren't commercially available or smart to carry in many places). I think I'll get over the temporary Furry Paranoia.

If I go suiting in crowds of drunk people again, it will be smart to take at least one bodyguard spotter per suiter, plus a "traffic controller" for everyone. Trip and I could have used three spotters among us. Suiting in a large group would be much safer too. I look forward to helping make a furry float for Pride 2013 that is more fabulous and fluffy than anything the world has yet seen.

EDIT: here's some of our photos. 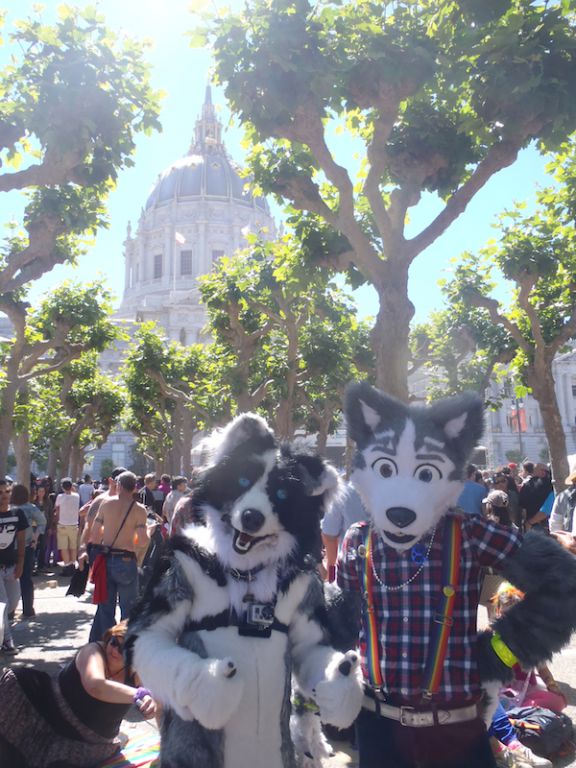 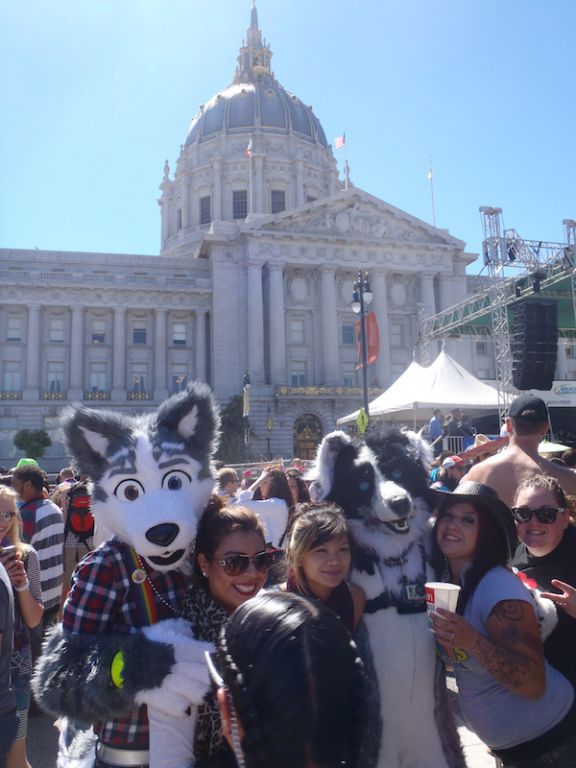 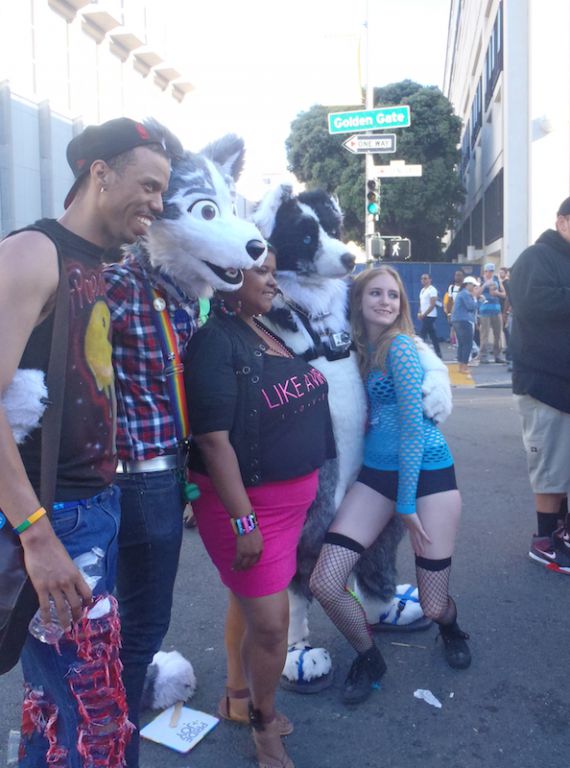 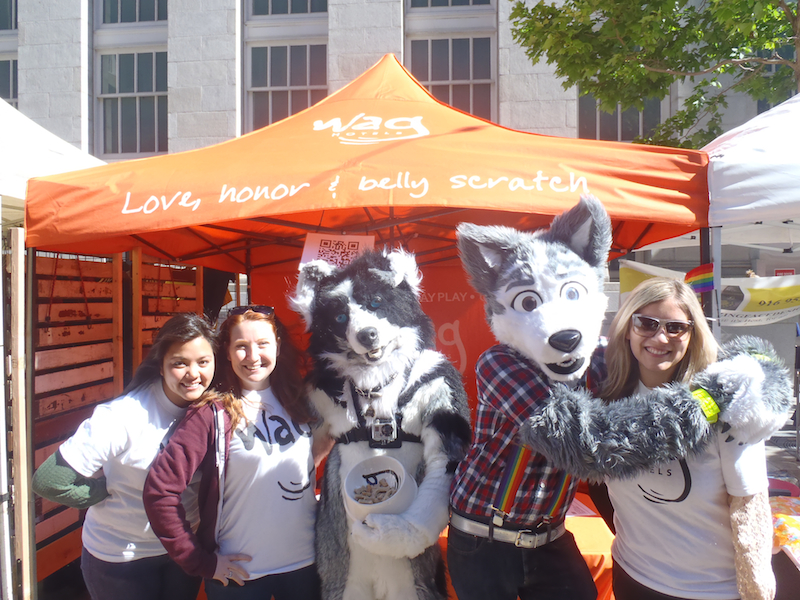 ... And here's some photos from a pro photographer.

If you have read this far, please take a look at this benefit for a beating victim who tried to stop a gay bashing during San Francisco Pride weekend.

Always disappointed I don't see a similar thing in the NYC Pride Parade ^.^;;;

To make a couple minor corrections:

I was part of the organizing crew for both the 2000 and 2001 Furry Pride Contingents. We worked it out on a flip chart in my living room.

I am the red fox "Thomas" from ASB fame in the first image above.

The picture was taken in 2001, if memory serves.

Also, there was no drama to speak of. The only issue we ran into was what to put on the leaflets and that there was a generator too close to some flammable material.

We had an awesome time! I hope we can do this again sometime. I will have to see if the banners are still in storage. :)

I hear there was drama about connecting furries + LGBT

I'll admit it does make me a bit uncomfortable.

I can definitely see that. Considering the very extreme atmosphere of many aspects of the Pride parade, putting furry into the mix does sort of play into the whole CSI / Sex2k aspects that many furs try to disassociate themselves with. You have on top of that connecting fursuits to a sexual orientation, many people see what should be a kid friendly costume being connected to a very not-kid friendly atmosphere. For those of us who fursuit at charity events and the like... it can be a bit worrisome that fursuiting being connected with something that might worry parents could come back to hurt those other fursuiting opportunities.

I... don't know the answer to any of this or where I really fall in the equation. Uncomfortable is putting it lightly ^.^;;;

Great write-up! Thanks for posting it.

I believe I was involved in all three previous furry contingents. I have to disagree with an earlier comment: There was considerable drama each time. But in the end it all worked out.

The first time we did the parade was 2002. I should know, I organized it. There was, indeed, a lot of drama and opposition to our being in the parade, and especially to our using the word “furry”. I have all the emails beginning in 2001 on both BAF and the furrypride mailing list that we used to organize, if anyone is ever interested in seeing all the fun and all the controversy. I also have all the registration and other official material from 2002. That picture above is from 2003, our second year, when Bos’n and I co-organized the contingent. He is standing on the street in front of the truck and I am on the truck in the black puppy fursuit. I’m not sure how these years and stories have gotten so mixed up, but hey I’m here to set it straight (so to speak).