Friendship is Magic on the Printed Page

Back from San Diego Comic Con with sore feet and lots of stuff to tell you about!

First up: Among the many things at SDCC dedicated to My Little Pony — Friendship is Magic was the news that IDW Publishing will release a brand-new full-color MLP-FIM comic book series, starting up in November. The lead artist for the series is Andy Price, who since the announcement of the comic has been answering a flood of questions over on his Deviant Art page. According to him (and IDW, whom your trusty ed-otter spoke to at the con), the series will feature brand-new in-canon stories of the inhabitants of Equestria, not adaptations of the existing TV episodes. Various artists have been commissioned to create the covers for each issue. Mr. Price made it a point to note that his art for the series will be all hand-drawn and hand-colored. Check out his site or the IDW site for more news on a release date for the first issue. 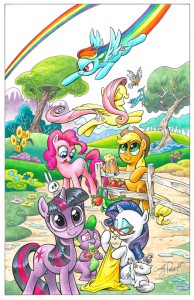