Leanna, a hermaphroditic fennec fox-morph, is an artificially created sex-slave in the League of Non-Aligned Worlds, biologically designed to crave lots of sex. Because shi is an “exotic”, intended to be a spy as well, shi is surreptitiously made intelligent rather than a mindless fuck-toy. When Leanna’s master dies, shi disguises hir intellect and is sold off as another no-brain pleasure slave. When hir slave ship breaks down shortly after entering into Stellar Federation space, and the human crew abandons ship, Leanna is the only slave on board intelligent enough to turn on a distress beacon and guide the Federation starship Pegasus to them.

At this point the story widens to become that of Leanna plus several of the Pegasus’ crew: notably Chakat Forestwalker, a biologist; Chakat Midnight, the Pegasus’ Security officer and Forest’s lifemate; Admiral Boyce Kline, the human commander of the Pegasus; Commander Rosepetal Silpurr, the Caitain (two-legged felinoid) first mate and Forest’s and the Admiral’s co-mate; and Doctor M’Lai Saarath, the Pegasus’ Caitain Assistant Medical Officer. At first Leanna tries to keep her intelligence hidden, but it quickly becomes evident that shi is smarter than shi pretends to be. Once shi is welcomed into the Federation and is convinced that it is truly a free society wherein all humans, taurs, and aliens are equal, Leanna is delighted. However, she still has her built-in sexual urges. Shi literally cannot go more than a few days without becoming a mindless animal compelled to sexually attack whoever she encounters. The casual group sex of several of the Federation’s species (plus M’Lai’s medically-controlled nymphomania) makes Leanna’s plight a subject of sympathy rather than of shame, and everyone tries to find a 24th-century medical cure for her condition. However, seldom has a novel featured so much blatant sex in such a clinical manner.

If you are looking for a “different” s-f story, More Terrible Than Chains certainly qualifies. It forces the reader to accept an intriguing and complex society that is not based on traditional Judeo-Christian standards.

Its main flaw is that it is rather weak as a novel, since it originated as eight chapters in the midst of Doove’s ongoing Forest Tales. It helps if the reader is already familiar with this series, which is written in an episodic manner. Instead of building up to a big climax, there are little chapter by chapter climaxes. The book keeps switching back and forth between telling Leeana Fennec’s story, and eavesdropping while Forestwalker and the others tell hir their stories. However, it is all colorful, and does lead to a satisfactory conclusion (although not a final one – Leanna reappears in later Forest Tales).

There are more characters than just Leanna, too; notably the four homosexual bunny brothers who want to remain on the Pegasus as cooks: ‘Wait a moment, Forest,’ Rosepetal objected. ‘They haven’t even been processed yet, and neither have they been formally admitted as Federation citizens. We can’t just be handing over an official position on a Federation starship just like that!’

‘I’m sorry, Commander, but I see the situation differently. By taking on the slaves, you have already taken them into the Federation. You might as well let them do their work while the bureaucracy gets around to making things official. I have examined them in conjunction with the Ship’s Counsellor, and we agree that they are ideally suited to the position, and definitely not a threat to anyone. Rose, I don’t want to see officiousness prevent the very thing we’re trying to achieve with this exercise.’

Rosepetal was about to say more, but Boyce held up his hand to stop her. ‘I will go see them and judge their case personally. I have the power to bend the rules occasionally, and this seems like the right occasion. However, there’s still one aspect you haven’t addressed, Forest, and that is their sexual dispositions. As you’ve said, they’ve all been bred as sex slaves. 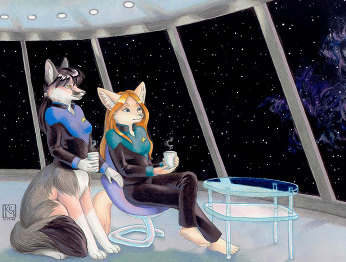 How does this affect their situation?’

‘Actually, in their case it’s not a problem. Although they are totally homosexual, their sexual inclinations aren’t of a compulsive nature, unlike many of the others. They are all capable of having a normal relationship. In fact, all four of them have met and socialised with crewpersons of similar sexual leanings already.’

Midnight spoke up at this point. ‘Before anyone protests, I have had the brothers under discreet observation during their time in the galley, and kept a close eye on their… interactions… with the crew. Let me assure you that neither the bunny brothers nor the crewpersons were abused in any manner, and that the rest is none of our business.’

If you do not mind the emphasis on sex – the unconscious and conscious going into heat, the rutting, and suchlike, which are presented in a detached, almost-abstract way, you will enjoy More Terrible Than Chains.

As much as I like chakats, all those I know who've used them as fursonas did so primarily for the sex. Leanna says it best:

"You keep telling me that your kind weren’t made as slaves or sex-toys, but everything that I learn about you seems to point otherwise." (Forest Tales #21)

Yes, the emphasis of that story arc was on sex and sexual attitudes amongst the various species and races. For the most part it was not intended as a romance novel, hence my detached approach to the subject.