Cowabunga Turtle Dudes in Their Very Own Van

The first time our buddies the Teenage Mutant Ninja Turtles came to animation was in their first TV series, created in 1987 by Murakami-Wolf-Swenson. More comedic in tone than many Turtle variations, this version ran for no less than 10 seasons on TV, intersecting with several of the movie adaptations. Now Lionsgate will soon release all 10 seasons in a 23-disc DVD box set — contained in a bright and shiny turtle-van! “From their origins on the comic book page to the depths of Dimension X and beyond, the pizza-loving, shell-busting Leonardo™, Donatello™, Raphael™ and Michelangelo™, with the guidance of their Sensei, have been delighting fans for decades with their turtle power. Whether it’s facing fierce enemies Krang™, Shredder™ and Lord Dregg™, saving humanity from near extinction, or battling against life-altering mutations, the half-shell heroes are always ready for heart-stopping, time-bending, straight outta the sewer action!” Look for it in November, or order it from Amazon today. 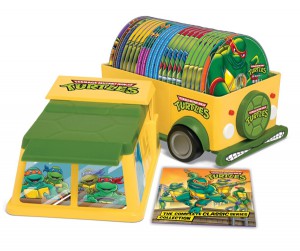 AH DAMMIT, this is so much cooler than the Thundercats DVD box set! Why couldn't that have come in a Thundertank?