Discotek Media have released all 26 episodes of the original anime series Sherlock Hound in a special 6-DVD box set. “Written and Directed by Hayao Miyazaki (Spirited Away) during his time at Japans largest animation studio, TMS. Before he went on to create Totoro and Studio Ghibli, Miyazaki captured a whole generation of children’s imaginations with his retelling of the Sherlock Holmes mysteries using a loveable cast of canines. Sherlock Hound, released as either Famous Detective Holmes or Detective Holmes in Japan, is an anime based on Sir Arthur Conan Doyle’s Sherlock Holmes series where all the characters are depicted as anthropomorphic animals, the majority dogs, though Holmes is a fox and his enemy Professor Moriarty is a wolf. The show featured regular appearances of Jules Verne steampunk-style technology, adding a 19th-century science-fiction atmosphere to the series.” You can order the new box set over at Discotek’s web site. 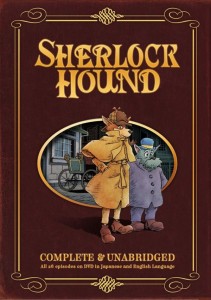 Well, not exactly. Yes, Miyazaki was asked by Tokyo Movie Shinsha to plan the series for TMS’ client, RAI in Italy who was the one who asked for “Sherlock Holmes with dogs”. And Miyazaki directed the first six of the 26 episodes (which were not episodes #1 through #6, but were scattered through the first half of the series). But then the Conan Doyle estate raised legal objections to the series, and everything was put on hold for awhile. By the time that TMS was able to resume work on the series, Miyazaki had quit the studio and was working with Tokuma Shoten on “Nausicaä of the Valley of the Wind(s)”. So TMS got Kyosuke Mikuriya to direct the final 20 of the 26 “Sherlock Hound” episodes.

Somebody tell Discotek their press release is wrong!