There’s no way we could describe the new graphic novel District 14 any better than the publisher, Humanoids Inc., did in Previews magalog: “Follow Michael the elephant as he arrives to the city known as District 14, a labyrinthine metropolis where humans, animals and aliens all co-exist.  A unique anthropomorphic mystery with an intricate plot and a fantastic cast of characters, this incredible French series is finally making its way across the Atlantic.” It’s written by Pierre Gabus and illustrated in black & white by Romuald Reutimann, and it’s coming out in hardcover this January. 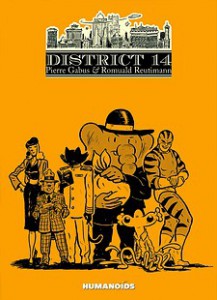