We’ve been following this one since we first caught wind of it in Animation magazine, and somehow it snuck by us… and right onto DVD at your local WalMart, no less. Cinderella: Once Upon A Time In The West (known as Cinderella 3D in Europe) is a new CGI feature from France, directed by Pascal Herold. The story is much as you’ve ever heard it before: Cinderella (a pretty pronghorn who can handle her own in a fight) lives with her cruel stepmother and ugly stepsisters (all of them big old hounds)… this time, in a town in the Old West. A handsome prince (also a canine, but much more… handsome) comes into town and… well you know the rest. Or do you?  Did we mention the sand pirate monkeys who fly on vultures? Yes, it’s that kind of film! It’s produced by Delacave Studio, and you can check it out at their web site. Oh, the DVD is in English, by the way. 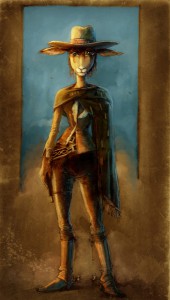 I have been tempted to pick this up to review it, but it is a bit more cash outlay than I would like for what looks like a cheap Rango knockoff (though, yay, Rango for inspiring cheap knockoffs!) and I'm already so behind (Green Reaper has two stories from me in the queue still and I'm looking at five I can do now plus another four on the bubble) I may just not get to it.

Cheap knockoff Rango or not, at least the pronghorn design is quite good (and I like her cowboy outfit here a lot better than her slightly-less-than-tasteful Indian outfit on the DVD cover).