Silent Dreams Will Haunt You

Here’s another of those “How did we miss this?” kind of things: Some of you might be familiar with the surreal works of Jim Woodring, especially his wordless funny animal comic Frank. Based on his own colorful dreams (and, some would say, rather scary dreams!), Frank follows the adventures of a “generic anthropomorph” (to use the creator’s words) across a surreal landscape known as The Unifactor. Well in 2011, Jim Woodring completed his first graphic novel starring Frank,  Congress of the Animals. Frank’s world becomes even stranger, if possible, when he is forced to venture outside of the frightening yet familiar realm of The Unifactor and into the larger world around him. Fantagraphics is again offering this full-color graphic novel in hardcover at Amazon and other sellers. Attention Deficit Disorderly has an extensive review as well — one likely to make your head spin in fact. 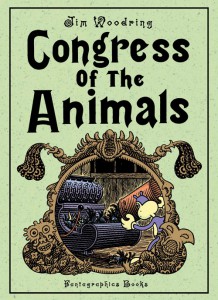