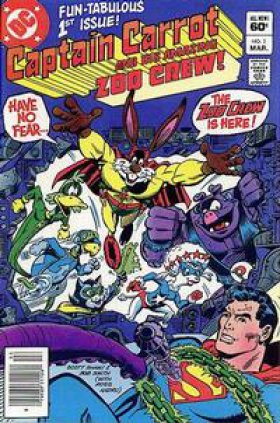 Somewhere, long ago, around when "Captain Carrot" was still being published, I read an interview (in "Amazing Heroes", maybe?) that Scott Shaw! gave talking about his and Roy's plans for future issues. There were the six original superheroes at that point, and Shaw! said that they were going to add two more to the Zoo Crew; Little Cheese, a mouse whose super-power was that he could shrink (like The Atom), and Whirlibird, a female blue jay (?) whose power was that she could create whirlwinds/tornadoes. The comic book lasted long enough for them to introduce Little Cheese, but not Whirlibird. Too bad.

Interesting this news is coming out on the heels of the recently released "DC Showcase Presents" printed collection. Although that one is in B&W.

The only good Captain Carrot series. Ignore the decades-later reboots like the 'grim and gritty', editorially-compromised abominations they are.