Jordan Reickek is an animator and storyboard artist with a long and storied career to his name: He worked on the original Ren & Stimpy series as well as The Simpsons early on; he directed the pilot episode of Invader Zim for Nickelodeon; and he worked on storyboards for DreamWorks films like Monsters vs Aliens, Megamind, and Kung Fu Panda. Cartoon Brew recently interviewed Jordan, and he spoke about his newest creation: Animal Control, which he produced for Cartoon Network Asia. The series follows the adventures of a pair of hapless and not-too-bright game wardens as they try to keep a lid on the silliness of their animal charges. The premier episode is up on Vimeo as well. Recently Jordan re-launched his production web site, Perky Pickle, which includes production art from many of the projects he’s worked on over the years. 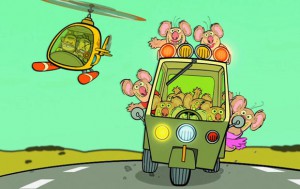