A Dandy in Space!

Lots of fandom folks (anime, furry, science fiction and otherwise) got excited this fall with the news that the team behind Cowboy BeBop had created a new, openly-silly science fiction anime called Space Dandy.  The teaser trailer started making the rounds on YouTube. Well now comes even better news: Thanks to the efforts of Funimation, Space Dandy will be the first ever anime to premier in Japan and dubbed on American TV, simultaneously. It’ll be part of Adult Swim’s Toonami collection. Here’s what the producers say: “Space Dandy is a dandy in space! This dreamy adventurer with a to-die-for pompadour travels across the galaxy in search of aliens no one has ever laid eyes on. Each new species he discovers earns him a hefty reward, but this dandy has to be quick on his feet because it’s first come – first served! Accompanied by his sidekicks, a rundown robot named QT and Meow the cat-looking space alien, Dandy bravely explores unknown worlds inhabited by a variety of aliens.” According to the folks at Cartoon Brew, “Anime auteur Shinichiro Watanabe (Cowboy Bebop, Samurai Champloo) heads up the direction of Space Dandy which is produced by Japanese animation studio Bones and written by Keiko Nobumoto (Wolf’s Rain, Cowboy Bebop, Macross Plus), Dai Sato (Cowboy Bebop, Ghost in the Shell: Stand Alone Complex, Eureka 7, Ergo Proxy) and Kimiko Ueno (Crayon Shin-chan).” Check out the new trailer on YouTube now! 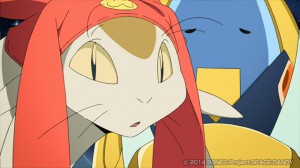 Ah, so that's where Elvis Presley went-- ain't that a Dandy?