So the Comic Book Movie site has released an image they found showing a much more detailed look at what the Teenage Mutant Ninja Turtles are going to appear like in the new film directed by Jonathan Liebesman (Battle Los Angeles) and produced by Michael Bay (Transformers, et al). The look is certainly… different, isn’t it? Guess we’ll see more images and probably some footage soon, as the film is scheduled for release this August. 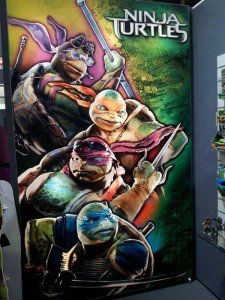