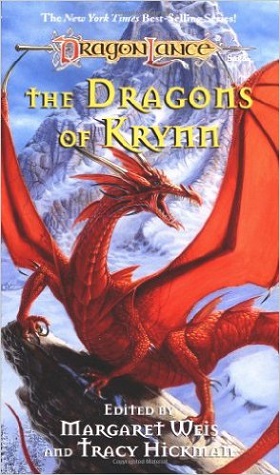 Almost 30 years ago, Dragonlance exploded into the role-playing world with new sets of player characters and a fresh take on monsters. In my circle of friends, reading about Dragonlance proved more interesting than actually playing in the setting.

It's my understanding that there are over 200 novels and collections in the Dragonlance universe. I believe the last new Dragonlance novel was released in 2010, with the last reprint released in 2011. Along with Dungeons & Dragon's world of the Forgotten Realms, Dragonlance was one of the most popular shared worlds in fiction. I wouldn't be surprised if there were more of these books waiting for us in the future.

When I last set foot on Mount To-Be-Read (what I call my queue of unread books) this old classic was waiting for me. I have had mixed experiences with the Dragonlance books and I hesitated at reading it for a moment.

But then I wondered how the dragons of Dragonlance would stand up to a furry eye? That made me curious as I tended to read the TSR novels as I would read any other fantasy novel. Maybe I shouldn't have a different mind set when reading different sub-genres but I do. I look for more logic and more relationship in furry stories either with the environment or with other people/creatures. While in a different sword and sorcery fantasy realm, I care more about mood and the character's struggle to reach his goal.

So, I set out to read The Dragons of Kyrnn with a furry eye, looking and hoping for anthropomorphic tales that elevated a dragon from monster to character.

Interestingly enough, some of the best of the stories had very little dragon in them. Still, there were five stories in the collection that I will recommend to my fellow furries and scalies.

"The Best" by Margaret Weis

This was a wonderful bit of story telling that really let me get into the head of a dragon.

It starts with an inn and, in typical RPG fashion, people who would normally never travel together are given a reason to. All turn out to be the best at what they do (and what they do is profitable). They go visit a dragon's lair and things go as planned. For the dragon.

This is one of the few stories where we really get to know a dragon. The Old Grouch in this story seems just a shade more complex than his rider gives him credit for. Still, he's not the lead, his rider is. Stoic John reminds me of a jock from high school who's been properly tested in battle.

I liked the story and the way dragon and rider try to adjust to a new "member" of the team.

"Scourge of the Wicked Kendragon" by Janet Pack

One of the funniest tales in the book, it's a transformation piece of a Kender into a Dragon. Lots of smiles and head shaking in this story; it almost made me like Kenders. Do we really get to know dragons ... real dragons? Well, no. But I do like transformation stories so I let the distinction slide.

"Honor Is All" by Mickey Zucker Reichert

I like the complexity of this tale, trying to examine good and bad in a world where things are largely black and white, were creatures can really be born GOOD or EVIL or NEUTRAL, but even then the world is big and there are so many exceptions, so many things that aren't what they seem.

The dragon in the tale is a most unique and interesting creature. While s/he isn't what it appears to be, the dragon is not the star of the story. The knight Mercanyin is. And his so-called honor may be the villain of the piece.

While there were stories here that were more fun or more exciting, this was an excellent think piece and heart breaking in its own way. But it still left me with a touch of hope.

"Kaz and the Dragon's Children" by Richard A. Knaak

I have a special place in my heart for minotaurs. Kaz was a quite welcome diversion from my hunt for Dragons. I relaxed my guard and a great silver dragon slipped in with him. The interactions in this story were excellent and the anthropomorphic characters were quite nearly perfect without being too human.

The thing that always gets me about evil organizations is that, in real life, they would all fail. Certainly, there are surprisingly, and seemingly, successful evil organizations in the world like ISIS and Monsanto. But in these cases, there's a support structure with superior people dedicated to what they perceive as the greater good.

In the RPG universes, good and evil tend to be very digital, very black and white. To me, evil is self-serving and destructive (yes, even lawful evil) and the height of fantasy isn't the magical beasts, but that these 3,000 plus member evil armies all very efficiently working together with nary an issue. It would take a very special sort of madmen to do so.

Which is were this story comes in.

This is, to me, one of the best conceived and unique stories in the book. It also has the virtue of really exploring what it means to be a draconian on Krynn while working under an evil overlord. Oh, these creatures were evil, of course, but the virture of engineering pride and teamwork helped to balance them out. I cheered for them and I felt a surge of pride in their accomplishments.

It was the strongest anthropomorphic story in this collection. It was certainly one of the best all around stories.

There were other five strong here, but I felt they were weak on Dragons or too liberal with the theme. I include them here because good work is always worth mentioning.

"A Dragon to the Core" by Roger E. Moore

The one thing about Dragonlance the RPG is that I abhor gnomes, gully dwarves and Kender. I never saw the appeal of playing one of them and I was always worried a fellow gamer might decide to play one.

I may have been a wee bit hasty.

This story has a gnome and gully dwarf. In a comedic piece, these two seemed to have found a proper place. And while I love the portrayal of the darker elements of the story, I laughed out loud in several places and felt the richer for it.

Still, I wouldn't want a gnome as a party member.

I have encountered this group before and loved them from the first.

This is a wilder and sillier adventure that I would not have enjoyed as much but for the previous tale about a gnome.

This town/village hates gnomes as much as I did, and I'm really at the point in the collection that I'm wondering if this anthology was a collection of gnome stories until marketing got a hold of it, truth be told.

And that's the rub in this story ... Jengar must tell the truth. He's dragon cursed to do so.

I did not know Dragonlance dragons could throw curses.

Jengar is hired by a dishonest man to clear the town of a nuisance in the form of a gnome trying to create a sail-less sailboat. And while the gnome is littering the beach with broken steamboats and jet-skis, he is no threat to anyone but his human apprentice.

In the end, Jengar actually gets something of a happy ending because there is a difference between truth and honesty. Plus, he's not the one riding off into the sunset this time.

I like this story. I have theories about the dog. I hope Jengar has more adventures that I might trip across.

Chaltifor is a stupid ogre.

As stupid and as greedy as he is, this story was excellent. Here be dragons, but best that I don't tell you about them. It might ruin your meal.

The dragon in this tale, Claw, is rather the villain of the piece.

He's a cruel sort and a few years ago, he had some nasty fun with a party of dwarven adventurers. He maimed one and left him for bait, killing one after another until the broken dwarf crawled away. No spoilers, just back story.

The dwarf returns with a hero who is rumored to be fearless.

The hero is afraid that the rumors may be baseless ... the fun of this tail is how the hero explores that as he explores the dragon's cave. Claw makes a strong appearance at the climax, but I still don't feel that the story was about him.

I used to obsessively collect DragonLance stuff - modules, calendars, books, the lot - I think I had around 25 of the novels. Suddenly the franchise dumped an entire new continent into the universe, and I abandoned the whole thing cold. The continent felt more like a money-making tactic than story-driven world-building.

I wasn't fond of the minotaur civilization but yeah, reading about Kaz was a positive experience. I was dismayed by the draconians all being evil (although I heard, years later, they had created a few good "Auric" ones). And the good dragons stayed out of the fray for so long that I never felt the stories really explored dragon culture as much as I would have liked.

So I'm happy to hear this collection is out there; sounds like some authors gave them a bit more well-deserved attention! Heh. If I'd held out for another 12 novels or so I would've read this when it came out.

Thanks for commenting!
The Dragons of Krynn is still available (CHEAP!) from Amazon merchants and probably most used book stores.

I liked the Kaz novels by Richard Knaak, but I didn't like his descriptions of the minotaur civilization much, either.

I may have to put some Kaz novels on Mount TBR!