The Unicorns Are Your Friends. (Can You Trust Them?)

More strangeness we found at WonderCon. Unstable Unicorns is a new fantasy card game, which apparently was one of the most successful Kickstarter campaigns of last year. Now the starter pack (and some bizarre expansions) are available at their web site. “Unstable Unicorns is a strategic card game about everyone’s two favorite things: Destruction and Unicorns. Designed by the creator of TeeTurtle, Unstable Unicorns features a combination of stellar artwork and carefully calibrated gameplay for an infuriatingly magical experience.” The web site features an introduction video that makes things clearer. Sort of. 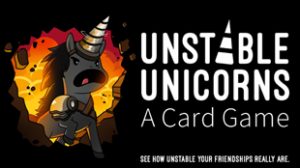 a totally fun game, bought it from an online uk store as i did not want to wait for it to come from usa
https://www.lymyted.com/product/unstable-unicorns/