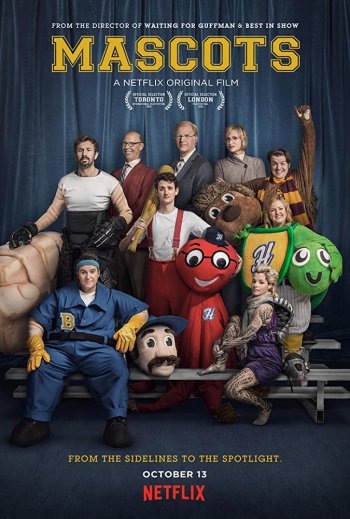 The movie starts with having interview style interactions with the characters to introduce their backstories and the mascot characters they play. They’re all quite awkward of course, and I guess that’s the punchline, I guess? Maybe my time in the fandom has made me numb to socially awkward individuals, and what’s why I’m not hip enough to get it.

It starts with a draining expositional dump where instead of seeing the characters doing cool mascoting things, they mostly talk about it and maybe do a very simple pose or wave, and so on. It certainly takes all the air out of any enthusiasm that anyone could hope to get from the interaction. Which is quite sad, given that the entire job of a mascot is to get people pumped up.

Even more depressing character development comes in the form of one mascot called “the Fist”. Someone who literally dresses up as a human hand that is balled up, in which you hope they never run into a mascot called “the paper”. He has an unbridled temperament which influenced his decision. The sadness is that in his backstory we learn was apparently a kangaroo mascot first before changing to a hand. Dang it, way to pull the rug out from under me there movie, I almost gave a darn.

The only two characters that gave me any sort of positive impact were the donkey and moose mascots that were the judges. Mostly because the dynamic between them is actually humorous instead of depressing. Also, they followed the rule of “show and don’t tell” when introducing them. Instead of a documentary exposition dump about their lives, the first we see of them is checking into the hotel. The donkey tries to get a coveted “John Wayne” suite, but fails to do so. The moose lady just walks up and takes it, as it was reserved for her. Just from this we get the entire dynamic between these two characters without going into their history. The male donkey mascot seen as the one always overcompensating and overvaluing himself, yet always finds himself in the shadow of the moose whose talents just follow her naturally.

If more characters were handled like these two the film would have been more tolerable.

The show goes begrudgingly on…

After a long draw up of boring drivel and backstory, the contest that was built up is finally here. And, it’s mostly disappointing. There is only one performance that really was impressive, and spoiler alert, that one performance won. Who would have guessed? Not really a spoiler, you could see it coming from a mile off as it seems to be the only one that had effort in the whole lot. Which makes the fact that this is a world renowned competition of the best mascots less believable. Most fursuit dance competitions, even at the smaller conventions, have a greater talent pool then these world greatest mascots provide their audience.

Which makes the fact that there are two jokes at the expense of furries kind of humorous, because to be honest, we’re far less weird than the individuals presented on this mockumentary. Oh we’re weird no doubt. But they did overplay the trope, with really outdated jokes about the whole sex-crazed angle that died in the mid-2000s. You know, like apparently some other reviewers had noted that this director’s mockumentary style also shows its age. Which as for someone who isn’t a movie buff, and this being my first experience with their work, it’s hard pressed for me to believe that the director had actual funny documentary projects.

I guess I will just have to take those reviewer’s words for it, as I have not interest. I mean, how do you screw up the jokes at furries expense? That’s a tall order to mess that up.

So the long of the short is, don’t waste your time with this one. You could spend a better afternoon watching paint dry. Or buy a ticket to your local sporting event and watch an actual mascot do actual mascotting. Both would be preferable to this snoozefest.

No mention of style of Christopher Guest and his filmography? It might be helpful to get why this movie is like it is. They set things up but don't specifically direct the actors and rely on improv, it works well when the humor is kind of dry. Spinal Tap or Best In Show are a better entry. This one was only so so to me. I did like the character doing the arty interpretive dance mascotting.

Some furs in San Francisco went to see this in fursuit with director and cast live at a comedy fest, I think they had a good time but I missed it. A live show seems like a good experience.

I had higher expectations and was disappointed the furry joke was so throwaway and unfunny. They could have gotten so much more from it.

Let me say a few things about cult movies and "furry movies"...

I think the niche of stuff that hits the sweet spot for capital F Furry fandom interest is really narrow or barely exists with how movies are made these days. Obviously animation is a great medium, and for that you get super slick high budget mass market stuff but it's generally bland (zootopia was solid and had grown up value but not exactly daring) or... for indies, they try to hit the same market except watered down and second rate. Theres some exceptions of raunchy stuff (Sausage Party) but its not exactly hitting that cult movie vibe. Like Ralph Bakshi or Heavy Metal you know?

I think about as great a modern example as you could possibly ask for would be Nova Seed:
http://dogpatch.press/2017/05/08/nova-seed-movie-review/

Movies like that are few and far between, it's as if Richard Williams actually had the drive to finish his Thief and the Cobbler. All I could ask for more of could be maybe some extra DIY fandom involvement, touring at cons etc. One day...

The kind of thing Bitter Lake was trying just doesnt do it for me, I don't think it aims above a tiny in-fandom audience.

Meanwhile, one other area of opportunity... documentary (but with extra juice) like Fursonas (an exploration of subculture, not just furry fandom) or Rukus (ambitious stylistic experimenting) or, something aiming for gonzo mockumentary merit.

Thats why I was disappointed at the joke falling flat here. Someone else should take a better stab at using fandom as a backdrop for something fun like that.

Remember (if you ever saw it) the anime TV series “Full Metal Panic? Fumoffu” (2003)? Not the most serious dramas. In episode 4b, teenage Sousuke wants to fight crime while keeping his identity secret, but he doesn’t have an appropriate costume, so he “borrows” one of the local amusement park’s funny-animal mascot costumes.

If only a mascot or fursuiter could move that athletically in real life!

Oof. Well, that answers that. Thanks for being the brave one.

Personally, I enjoyed the film. For me the take on fursuiters (a furry in a tacky, rental shop bunny suit humping someone in a top hat-shaped mascot suit!) was so over-the-top as to be ridiculous and not at all insulting. (Plus the "yip vs. yiff" conversation showed that somebody did their homework.)

Then again I also loved College Humor's "Furry Force" - again, it was so-over-the-top yet hip to what it was spoofing that it was (for me anyway) fun to watch. For every lame "Drew Carey" or "Back to You" take on Furry we need more stuff like this!

Oh, I found the College Humor one humorous, but because it was clearly given effort and it was known what the punch line was going for.

The situation in the film was ultimately unrealistic.

A) Furries probably would attend their own conventions to do that sort of stuff instead of wasting time at a mascot contest
B) Furries typically wouldn't wear generic animal costumes like that, and if they did they wouldn't find the costumes all that sensual.

With those two items to consider it made the bit feel forced...

Now if they had some nobody in a werewolf mascot costume try and hit on all the various animal mascot characters in a creepy way: The Porcupine guy particularly, that would have made for more awkward hilarity and would have been a running gag instead of just a throw away moment. Especially if the werewolf guy was talking to porcupine guy in furry lingo and it went over his head...