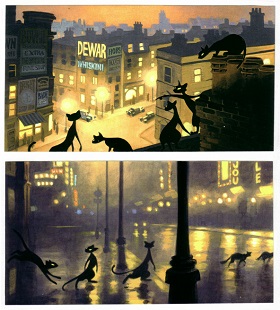 The musical features music by Andrew Lloyd Webber, though most of the lyrics come from T.S. Eliot’s collection of nonsense poems, Old Possum’s Book of Practical Cats, which the musical is adapted from. Webber will be writing a new song for the movie.

The original stage play was first performed in 1981 in London’s West End theater district. It opened on Broadway the next year. The play ended its run as the longest running show on either side of the Atlantic. It has since been passed, but still ranks fourth on Broadway and sixth on the West End.

Director Tom Hooper is probably best known for The King’s Speech, which won the Best Picture Oscar for 2010. His follow-up movie, Les Misérables, also was nominated for Best Picture. Hooper specializes in stage musical adaptations and biopics, both types of movies often considered “Oscar Bait”, which means that Cats might be in this vein. Even if singing cat movies are not often thought of as traditional “Oscar movies”, adaptations of popular Broadway and West End musicals have netted Best Picture Oscars for West Side Story, My Fair Lady, Oliver! and Chicago.

Cats has been notably hard to adapt into cinematic form in the past, possibly due to the complete plotlessness of the original material adapted by the musical, which itself adds the bare minimum of a story, relying more on the visual and aural spectacle of the music, dance and costumes to entertain the audience. Notably, Stephen Spielberg failed to helm an animated adaptation in the 90s (which would have taken care of two of his bucket list movies at once – a musical and an animated movie).

Note: The image above comes from that Spielberg attempt and has no other connection to this Hooper production and was only chosen to illustrate this article because no images have been released for the upcoming movie. Since every other outlet has already exhausted images from the stage musical, and this one looks really cool, I decided to utilize it instead.

Technically, while Spielberg was a hands-on producer on the animated version that never got made, he wasn't going to direct it. That job would have been done by Simon Wells and Phil Nibbelink.

I've seen Cats on stage. It's one of three Andrew Lloyd Webber musicals I've seen live. The others were Jesus Christ Superstar and The Phantom of the Opera.

Been enjoying Shark Week, I see.

It's Ian McKellen, not McKellan.
The character who sings Memory is "Grizabella", not Grizelda.